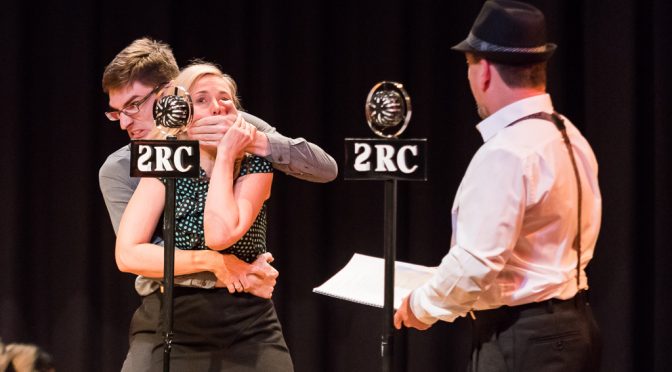 There are nine very different and unique plays, being performed live on stage this week, at Short and Sweet, the world’s biggest little play festival. Delicious dramas and dramedy, message plays, engaging monologues, and laugh-out-loud entertainment to end the evening. This year in a big new venue for S+S, and located inside the Academy of Music and Performing Arts (AMPA) building, and comfortably seating a maximum of 171. Top 80 Week Two Thursday 8th February 2018 until Sunday. The S+S festival has new shows every week for eight weeks, and runs through to April with both a Top 80 program (Thursdays-Fridays-Saturdays at 7.30pm and Sundays at 6.30pm) together with a separate Wildcards program (Saturdays at 3.30pm and Sundays at 2.30pm). The S+S gala finals take place in April 2018.

(1) “Manor of Speaking” by Pheona Mulligan initially appears to be a downstairs “Downton Abbey” parody, but this is unexpected drama at Lady Cassie’s manor, with multiple twists ahead. Mass murder by truck. Brinley Meyer directs Claudene Shoesmith, Bretton Reis and Chris Miller.

(2) “Untouchable” is an important issue play about married relationships, love, sex, death, as written by Joy Roberts and directed with panache by Glen Pead. Terminal cancer, but Sophie has been on chemotherapy for twelve months, and is still desperately hoping for remission, with her Ben always by her side, but Ben is not meeting her intimate needs. Starring Eliza St John and Matt Blake.

(3) “Bad Shitty Things” is a unique monologue dramedy about a convicted criminal finally released on parole, and is based on a true story. Starring Jorie Licett. An permanent alcoholic, fully trained during her latest prison time, now a liar who believes, she will find a way to never ever return to prison.

(4) “Very Brief Encounter” brilliantly written drama about parental interference when eighteen years old. “We were young and foolish”. Decades later, a chance meeting at an airport departure lounge, reveals that both women, have both lost their dream lover, equally sad and funny. Winning performances by Ann Sayegh and Suzy Wilds, lovingly directed by Cheryl Butler.

(5) “Butterfly Wings” by Adam Szudrich is a very entertaining monologue, starring Richard Littlehales. Young boy with the terminal genetic disorder “epidermoysis bullosa” needs to talk himself into actually taking a chance, to experience life on the edge, risking death.

(8) “Petty Crimes” written by Albert Jamae and directed by Samantha Walsh. Starring Bob Deacon ad Bridget Wilschefski. Two incompetent gun-toting criminals are not risk takers, and are trying their luck with simple household burglary, instead of home invasion or robbery. After disabling the alarm system, are first seen enjoying a meal, but without their gloves they are leaving an ample supply of fingerprints. They are discussing getting enough money to retire, when unexpectedly interrupted, there is a last minute proposal.