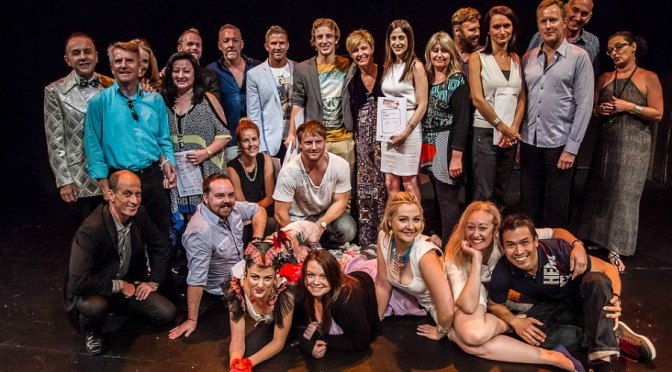 The Short + Sweet Theatre and Variety Gala Finals took place on the 21st and 22nd March at the York Theatre, Seymour Centre. These events showcased the best sixteen plays and the best seven cabaret and dance pieces from the 2014 Short + Sweet season. As an audience member I was privileged to enjoy performances from a very talented group of writers, directors and actors. Two very enjoyable nights at the theatre!

There were so many truly great performances; it is difficult to pick my favourite. I had seen several pieces earlier in the competition, but because of the different performance space it was a different theatrical experience.

Most pieces translated well to the bigger stage. STALEMATE, written by Sally Davies and directed by John Wood, featured Emily Daly as Eleanor, the cook, Theo Rule as Cookie and Matt Graham as Cookie’s lawyer. In this delicious piece of nonsense, Eleanor was faced with Cookie’s accusation that her plan to use him as the crushed biscuit base in her baked cheese cake was an inappropriate use of food. Cookie called in his lawyer, and the hilarity began. One is reminded of the recent High Court case where no fewer than four Federal Court judges turned their minds to the issue of whether ciabetta is biscuit or bread, in order to determine its GST status. We were all amused by that – but this legal tangle was even more entertaining! Finally, Eleanor noticed that the Cookie packet showed an expired use-by date; Cookie was devastated when Eleanor suggested he make for the rubbish bin. And that’s the way the Cookie crumbled! This was a very tasty treat!

The powerful monologue LATE FOR SCHOOL written by Iain Moss, directed by Lisa Eismen and starring Patricia Rowling, was a very different offering. It tells the horrific story of a young mother who left her child in the car on a very hot day, and the inevitable death occurred. The woman, also a teacher, was rushing to get to school on time after her husband retracted his offer to take the child to day care. This reviewer, who is also a mother and teacher, has frequently experienced similar stress, so this play was exceptionally close to home. I suspect the people who created this piece may have been teachers, as the classrooms and scenarios shown were detailed and believable. This play examines the difficult issue of working mothers, and there are no easy solutions. Professional women have the right and desire to work, but it is often an impossible juggling act. This play showed the mother’s dilemma with honesty and compassion. Well done!

My prediction in an earlier review that the play LEVEL 2 would win a place in the GALA final proved correct with this play featuring in 8th spot on Friday night. Written by Mike McRae and directed by James Hartley, this piece starred Bendeguz Devenyi-Botos, Marie Chanel and Ellen Williams as panel members whose job it was to decide if we, the audience would receive Level 2 clearance, meaning the capacity to be sentient beings! Tom Green played the part of Gamma, our creator, who pleaded his case to the panel. When the panel members first arrived they looked at the audience with bemusement, registering our unpleasant smell! The creator described us as being composed of meat and calcium sticks, with built-in religion.

The play did not translate well to the bigger stage at the Seymour. The actors moved around the space, as one would expect in that venue, but this very movement diluted their power as panel members. In the earlier performance, they were seated together at a desk, and their combined horror and curiosity were more effectively communicated with this blocking. Their voices were also compromised when they were facing away from the audience. I was very disappointed with this performance as I was truly looking forward to seeing it again.

AND WHAT A DAMN FINE MORNING IT IS written by Trace Crawford, directed by Stephanie Merriman and starring Sam Dugmore & David McLean was wonderful! The play looked at two suburban male stereotypes exchanging niceties over the fence, but it soon became apparent that beneath their pleasant facade each harboured a deep-seated resentment of the other. Their conversation was an escalating series of attempts to beat the other at the game of keeping up with the Jones’s.

Jim had just fertilised all the lawns in the area, Ted had bought a new lawn-mower. Jim bragged about his car, using the tech-talk that NO-ONE really understands, only to be outdone by Ted who had purchased a new hybrid! They then began to talk about their neighbour who had a new BBQ, noting that a man who has a grill like that HAS to be compensating for something! The irony was fabulous! The culmination of the competition was the announcement by Jim that his wife was pregnant; this was the last straw for Ted! Stereotypes? Yes – but valid comment as well!

For those who missed the GALA shows, make sure you catch up with Short + Sweet next year! It really is the best and biggest little play festival in the world!