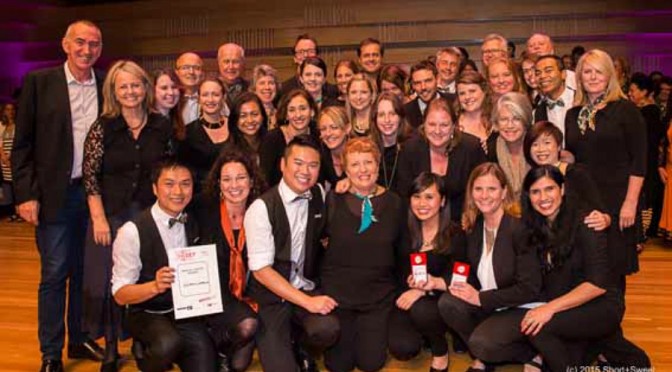 The SHORT and SWEET, VOICES Festival Coordinator, Lenore Robertson,(singer, chorister, director) confided to me that she saw music as very therapeutic and often inspiring, especially: “…sitting in the audience and watching the faces. It’s about sharing the joy of singing!”

Last night’s Gala Final was a feast of auditory delight, a love fest for devotees of choral excellence or just GP audients ready to have their ears treated to a wonderful variety of choirs, vocal ensembles and barbershop quartets.

This inaugural SHORT and SWEET VOICES Festival started with twenty eight entrants two weeks ago and came up with ten finalists. Unfortunately one Quartet was forced to withdraw due to a bout of laryngitis and , as our bright MC quipped, one voice missing from a harmonious four is likely to be insurmountable. We were asked to nominate two favourites from the remaining nine for an audience favourite award which proved very hard indeed, as every act was unique in their own way. I started using the old adjudicator’s trick of giving the first a five out of ten and marking the following comparatively. But I had to abandon this idea because they were incomparable! That’s not to say they were all perfection; but we’ll get to that later.

I SING ON THE CAKE were a sweet and clever beginning with their rendition of Kate Bush’s “Wuthering Heights” and a novel use of mobile phone torches in darkness. Their Director proved to be an accomplished singer as well. SISTA, (in dressing gowns!) used humour and spectacular costumes and voices to match, to fill the stage with only four performers. JOUBERT SINGERS surprised and intrigued with ‘bush sound effects’ and an original take on a Judith Wright poem. TREBLE MAKERS, (don’t you love these cute names?!) presented smooth mellow harmonies and then it was up to one of the stand out performances from SOULFOOD A CAPPELLA to sate our appetite and bring the first act to a resounding climax as they “Took Us to the River”, complete with unique choreography, excellent arrangements and impeccable harmonies! Phew! First act flew; please can I have some more? Here comes act two!

UNACCOMPANIED BAGGAGE will raise alarms at an airport; this little choir raised the ante with original arrangements of modern pop songs from The Proclaimers and The Beatles. THE JUBILETTES lived up to their name and brought the audience with them in the best use of audience participation all night as well as one of the best individual soloists. ALCHEMY A CAPPELLA were really cooking, even ‘burning the pot’ by the time they got to “Java Jive”! ALOUTTE, as I mentioned, couldn’t make it but that just cleared the stage for the finale and the eventual winners of the festival: COASTAL A CAPPELLA. These forty odd divas took the evening to new heights with stupendous costumes and glorious voices, inspired use of humour in “Shanghai” and faultless tight harmonies right through to their theatrical swelling final notes of the night in the Queen song “Somebody to Love”. Talk about saving the best to last!

The judges of this inaugural event were:  Erzsi Marosszeky,  President of the NSW Chapter of the Australian National Choral Association , Piroozi  Desai, Chief Executive of the Sydney Eisteddfod, Chris Puplick, former senator, and board member of NIDA and Australia Council Theatre Board, Ben Oxley , director of Cantorion Sydney, a male choir, also a  professional singer and runs his own music school, Elizabeth Birrell, music graduate, singer and singing teacher,  runs school and community choirs, and Pete Malicki, former Festival Director of Short+Sweet, writer and director.

The Gala Final took place at the Concourse, Chatswood on Saturday 21st March.

I did say we’d get to faults later but, what the hell. I loved the whole night and so did the audience! As VOICES Festival Coordinator, Lenore Robertson, said “We have only scratched the surface.” So here’s to next year. One for your calendar!