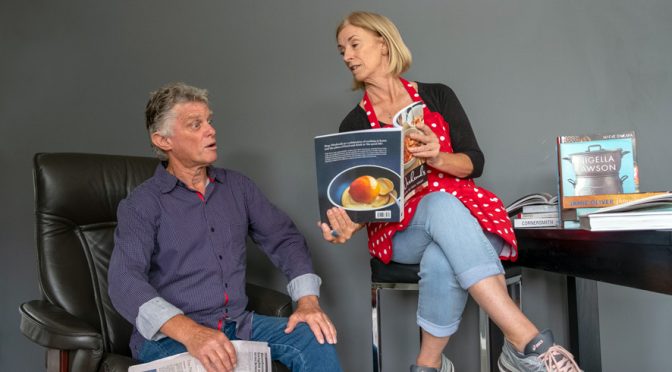 Short and Sweet is “The biggest little theatre festival in the world” and now returns for the third week of “live on stage” delicious incredible theatre entertainment, weird and vivid comedies plus elegant dramas, this week providing thirteen wonderful plays in bite sized morsels, each under ten minutes. This week also has the best of international entries from the world-wide network of S+S venues, including a full crew visiting Sydney from Chennai.

Second year in this big new venue for S+S, and comfortably seating a maximum of 171. Top 80 WEEK THREE, Thursday 21st February 2019 until Sunday. The S+S festival has new shows every week for eight weeks, and runs through to April 2019.

(6) LOVE LIES
Written by Fran Bowick
Directed by Bernice Breckon
ITC: Thespians
STARRING: Denise Metzger, Edric Hong, Amy Gordon
Huge comedy delight with charming pizazz. Holly and Richard, she signs up for treatment costing $50000 for the equivalent of a pre-frontal lobotomy so that she will again be madly completely in love and lust for her husband. It is never the years, it is always the mileage.

(7) I LOVE LUCY
Written by Bara Swain
Directed by Rene Lane
STARRING: Christine Skilton, Keira Sinclair
Excellent comedy set in a doctor’s waiting room, when two strangers meet. Two huge fans of “I Love Lucy” and “The Lucy Show” meet, but there is so much more to learn about the precisely why they are “accidentally” waiting for the same gynaecologist.

(10) AROUND THE WORLD IN 80 DANGERS
Written by Peter Greenaway
Directed by Felix Carlyle
ITC: The Upgraders
STARRING: Gaurav Kharbanda, Jawed Gebrael
YES Antony Robbins has a lot to answer for, because those who do not wander forcefully, are already lost. Interesting and very detailed comedy about eighty countries of the world, and eighty ways to die badly in those eighty countries. Includes deadly tarantula spiders, OR was that deadly taarr-are-nntt-too-laarse?

(11) SURPRISE!
Written by Mark Hervey Levine
Directed by Lisa Robinson
STARRING: Jesse Northam, Kristelle Zibara, Lisa Robinson
Dumped at his favourite restaurant, just because of his always ordering Corn Flakes. Of course “Peter The Psychic” already knew his bogan girlfriend Whitney was going to dump him after arriving at the restaurant. However the psychic waitress, who keeps finishing all his sentences, and perhaps already knows that the evening actually will soon begin with him at her place.

(12) EYE OF THE STORM
Written by Sonal Moore
Directed by Taufeeq Ahmed
ITC: Nautanki Theatre Co
STARRING: Conchita De Souza, Suman Mathur, Dinesh Karuthedath
Arranged Indian marriage, excellent well-written drama about Reema who is a decidedly gainfully-employed non-virgin Sydney adult female, who has been taken back to Mumbai, to marry the un-employable Mumbai male of her parent’s dreams. Her confessional assumptions, but does she want her parents to know the whole truth about living in Sydney?

(13) REFUNDS FOR WISHES
Written by Bob Ballinger
Directed by Sam Haft
STARRING: Edric Hong (Victim), Alice Furze (Genie)
Asking the “Genie Of The Lamp” for anything, anytime, anywhere, must be such a very tempting proposition, so be very very careful selecting those three wishes. Huge comedy because the genie has excellent/adequate attitude, and she wants to win at all costs, so asking her for a refund is solely at your risk.