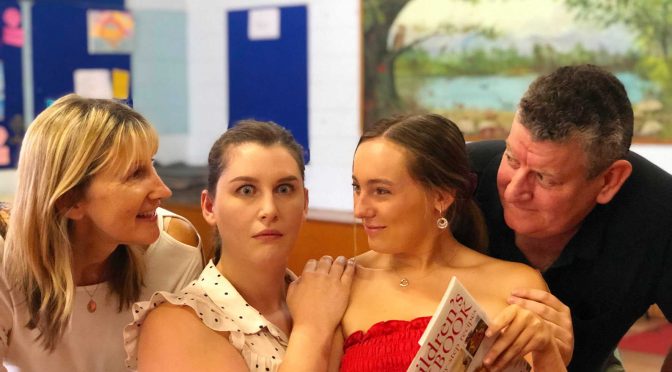 There are eleven very different and very original plays, being performed live on stage this week, at Short and Sweet. A delicious comedy monologue provides laugh-out-loud entertainment, message plays about the drug menace, ghosts, relationships, millennials, comedies, dramatic intrigues and dramedy. Explore each ten minute play covering all manner of things, in a tasty assortment of live theatre treats vividly explored on stage during Short and Sweet Week Seven of “The biggest little theatre festival in the world”.

Second year in this big new venue for S+S, and comfortably seating a maximum of 171. Top 80 WEEK SEVEN is a huge week of must-see comedic delights with each brand new play under ten minutes, Thursday 21st March 2019 until Sunday. The S+S festival has new shows every week for eight weeks, and runs through to April 2019.

(1) PAILLES DE MER
Relationship drama, with a young couple at the beach. “Let’s Get Married” just say it, but only if you really mean it. Breaking up is hard to do. So will they, or won’t they?
Written by Max McCreary
Directed by Idam Sondhi

(2) CHERYL
Imaginary Motherhood has many many benefits, especially to motivate library stragglers to immediately go home. “I have to pick up my daughter” is a double edged sword, once the lying starts, the lying never ends.
Written by Katrina Samaras
Directed by Jane Ann Scott

(3) OH NO A GHOST
Winner of Short+Sweet Illawarra (Judges and People’s Choice). Huge comedy delight. Real Estate Agent is on a steep learning curve discovering the joy of GHOST 101. Trying to sell a haunted house with a very visible glow-in-the-dark ghost, with the ghost seeking the arrest of the man who murdered her.
Written by James Turnball
Directed by Arthur Gallagher

(5) ONE NIGHT –
Message play, that seems to be about a “one night stand”. Ends with a wonderful and quite unexpected twist.
Written by Jane Flanagan
Directed by Martina Donkers

(6) GOOGLE BOX
This appeared to be short story comedy, all about a female ventriloquist and her grandmother dummy. She is teaching her grand-mother, precisely how to use the internet and her google home device. Surprise ending.
Written by Debbie Neilson
Directed by Brenton Aimes
ITC: B&D productions

(9) COOK
Clever locked-room drama, with unexpected confessional intrigue, starting with loud yelling and screaming. Banker (Tom) and his Tinder Date when they wake up the next day find themselves trapped in a death room, with only a few minutes left, before they will both die.
Written by Steven Larkmann
Directed by Kathleen Hrayssi

(10) STELLAR COLLUSION
Dramedy with cute very large green cardboard automobile on stage. Yes everything is fine, on a road trip journey and a relationship journey on the way to view an imminent stellar collision.
Written by Leonie Jordan
Directed by Natalija Karna

(11) YOUR CALL IS IMPORTANT
Immediately reminded of the 2018 comedy movie, “Sorry To Bother You”. This comedy play is so much more fun, and so very anti-banks, all in the best possible way. Constantly rhyming whilst on the telephone, in a queue waiting for ninety-four minutes, waiting for one real live human to finally answer the call and provide answers to the many banking questions.
Written and directed by Ruth Fingret