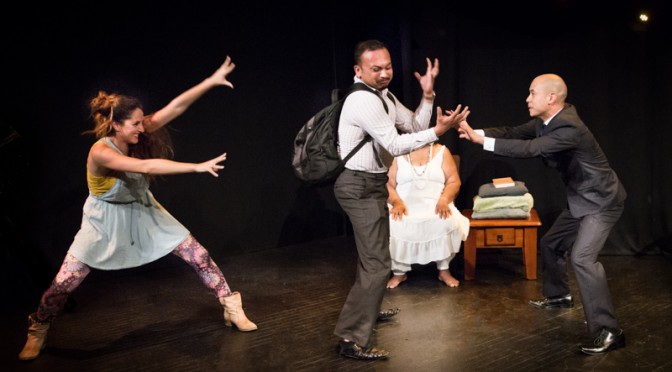 The biggest little play festival in the world. 2016 and this is the fifteenth year of SHORT+SWEET THEATRE SYDNEY, running Wednesdays to Sundays, from 6 January 2016 to 13 March 2016 with the very best of the best are returning in March at the Gala Final.

All the heats have finished, and these twelve just simply superb plays all deserved getting to the S+S WILDCARDS finals. Providing clever message-pieces and both drama and laugh-out-loud entertainment galore, presented in the ten minute play format.

(3) WAR KISS – Wildcards Week 8 – Beautifully written drama from prolific playwright, Alex Broun. Exquisite and perfectly performed wartime memoir, very clever dialogue all about Perihan (Olivia Jubb) a young woman who falls in deeply and madly in lust with “the one” Karim (Nadim Accari) at the wrong time and in the wrong place. Everything starts by ordering turkish coffee with maximum sugar. The tremour in her voice and the quiver in her lips, the pacing and the timing immaculate, and a crowd pleaser. Writer: Alex Broun, Director: Brett Garland

(4) ANGELFISH – Wildcards Week 6 – Huge comedy within a vegan message piece. Angelfish are one of the most popular freshwater aquarium fish. A grazing menu of Angelfish from the Tasting Menu are offered at a restaurant by Chef Mirabelle – the Chef (Ashlea Hingston). This couple are in their fifth year together. Viv is the vegan (Joyce Vasta) and Samuel (Ben Dewstow) after five years as a forced vegan, wants his old diet to return. So will their relationship survive the Angelfish? Writers: Leonie Jordan and Bobby Duncan, Director: Leonie Jordan

(5) BLESS ME FATHER – Wildcards Week 1 – Drama unfolds within the Catholic Confessional, victim versus offender. Needing resolution, the former Alter Boy (Wombat GT) now a young man, confesses to envy and suffering for the sins of others, for all that was done to him repeatedly by Father Dowd (Graham Egan). Writer: Joe Starzyk, Director: John Tsioulos

(6) THE ODDS OF GAZING – Wildcards Week 4 – Interesting comedy set in limbo, where the Gambler (Timothy Abdallah) is given just two choices with 2 to 1 odds by the Fortune Teller (Jessica Priebee) via her crystal ball. If only the Gambler understood that there are always multiple choices, beyond the initial two choices suggested? Writer: Sara Seal, Director: Kathryn Mas Thomas, Costume + Prop Design: Brittany Stephen

(8) ALL STATIONS TO SANITY – Wildcards Week 4 – Comedy, yes we are all being watched, especially at your local Railway Station. William (Jayden Gobbe-Bezzina) is waiting forever for his train to arrive, when the beautiful Cal (Tegan Gow) arrives. An extremely odd conversation is started with the CityRail voiceover person (Jennifer Halliburton), and then the CountryLink voiceover person intervenes. ITC: The Regional Institute of Performing Arts (RIPA), Writer + Director: Joel Mews,

(9) THE FORMATIVE YEARS – Wildcards Week 2 – Heavily pregnant with their first child, and they are both waiting for the birth, to learn the gender of their child. So many decisions to be made before the birth. Choosing the correct pre-school, school, high school, university. Undisciplined versus entitled, and can they make all the wrong decisions? Writer: Brandon Crose, Director: Avantika Tomar, Cast: Gaurav Jindal (Expectant Father), Avantika Tomar (Expectant Mother)

(11) THE MEDIATOR – Wildcards Week 5 – Female Senior Mediator Mandy (Ros Richards) at the Family Law Court, mediating the parental access needs of Sally (Liz Harper) and her ex Mitchell (Ben Brooke). Comedy with just so much continuous swearing in under ten minutes, and each and every f*word always generated huge laughter from an appreciative audience. Should write an audience award winning ten minute comedy play with 1800 f*words, as it is guaranteed to get 1800 laughs. Crazy unexpected twisted ending. Writer: Vee Malner, Director: Tom Richards

(12) BUT I JUST GOT HERE – Wildcards Week 6 – Wonderful comedy about woefully inept Sara, who moves from Brisbane to a flat in Sydney, where everything that could possibly go wrong for a new flatmate, goes much worse, unbelievably worse. The really cute dog, was an immediate audience favourite. Writer: Oprah Oyugii, Director: Ren Thackham, Cast: Danny Bolt (Michael – the husband and Landlord), Benjamin Scott (Sweetie – the Dog), Sarah Berry (Sara – the new tenant), Scarlett Arthur (Maggie – the wife), Adriana Orecchio (Beth – the pregnant lover)