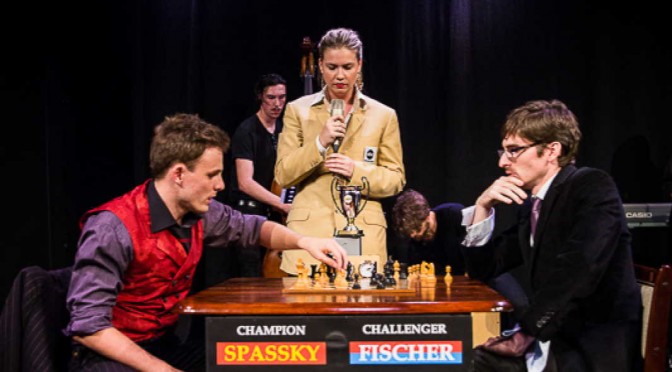 The biggest little play festival in the world. 2016 and this is the fifteenth year of SHORT+SWEET THEATRE SYDNEY, running Wednesdays to Sundays, from 6 January 2016 to 13 March 2016 with the best of the best returning in March at the Gala Final.

There are ten just simply superb plays this week. Captivating, strange, unique, and laugh-out-loud entertainment galore, and one with a live band.

(2) PLASTIC – University student Ally (Alicia Easaw-Mamutil) has a plastic bag over her head, the telephone rings and she takes the bag off, to answer the telephone call from Glebe Police, Constable Gould (Will Hall). Yes her neighbours are Peeping Toms, delicious non-suicidal comedy ensues. The unanswered question remains “Do you have sex with your shoes on?”
Writer: Allee Richards, Director: Ariella Stoian

(3) AULD LANG SYNE – Forty year high school reunion, should old acquaintance be forgot, because two men finally learn that they secretly had a sexual relationship with the same woman at the same time? Relationship humour results as these 58 year olds, formerly three close school friends, now discover that they were never ever friends. Just bed-buddies for the woman of their dreams, as one man is never enough, she needed exactly everything that both offered. Writer: Dan Borengasser, Director: Melissa Maclean, Cast: Stephen Allnutt (Blake), Leilani Loau (Liz – the woman), Peter Tregilgas (Jack)

(4) SAME TIME NEXT WEEK – Perfectly directed and performed drama monologue, in one voice. Brave choices in lighting states achieved the best possible impact, to illustrate the scars of a violent childhood, and the long suppressed violence within. Past violence by his father, ultimately generated violence by the son Alan (Dudley Levell) to his wife Jenny. Concussion, bruises, three broken ribs, gbh, avo, and just so much more. Writer: Dudley Levell, Director: Valentino Arico

(5) CHICKEN CURRY – Audience favourite, this curried-away toilet-humour comedy is set in the Mens toilets. Two men with severe gastric food poisoning, with their chunder everywhere. Initially pretending to be a man, Lily (Cerise Cofoed) is the young woman hiding from her boyfriend Anton (Cassius Russel), and the young man Blake (Tom Henderson), whilst vomiting their Chicken Curry, they discover that they have so very much in common. Anton arrives, and Lily finally learns that Anton is married, and the one and only reason why Lily is his girlfriend. Writer: Georgina Adamson, Director: Wombat GT, Cast: Cerise Cofoed (Lily), Tom Henderson (Blake), Cassius Russel (Anton)

(10) CATASTROPHISING IS NOT A WORD! – Comedy on a grand scale with Josie the hyper-active hypochondriac teenager, blessed with a google android telephone, supplying her with all the wrong answers, and each answer providing her with brand new illnesses.  How many diseases can one person have, and yet somehow easily manage to survive?   ITC: Seat of the Pants Productions, Writer: Ruth Fingret, Director: Ruth Fingret, Assistant Director: Jennifer Shames, Cast: Hilary Park (Josie), Mel Ryan (Google Help – VOICEOVER)

Production photography by Sylvi Soe, and displayed in performance order.