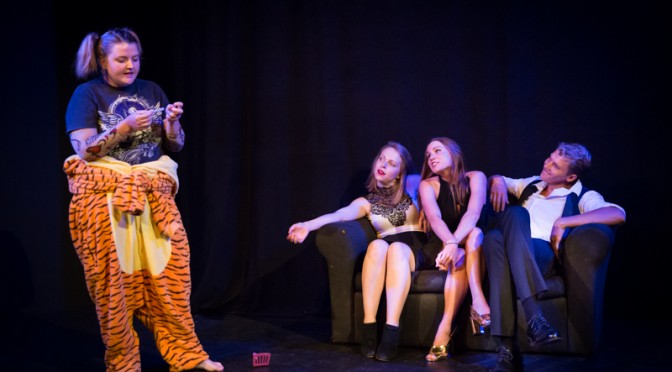 Production photography by Sylvi Soe, and       displayed in performance order.

Some weird, some strange, but nevertheless this week has nine very entertaining short pieces.

2. DIVORCE FANTASIES – Comedy at its best, that gets very strange, very quickly. Okay she invited him back to her place, and to be turned on, she needs to relive the anger issues of her divorce. He agrees, then the divorce lawyer arrives, followed by the woman that he had an affair with, and then the child of the marriage tells all. So much went wrong so very quickly, with an unexpected twist at the end, that explains all. Writer: Elena Burger, Director: Guy Verge Wallace, Cast: Alannah Robertson (Avery), Challito Browne (Adam), Luke Davis (Craig), Stephanie Beck (Marcia), Hannah Pembroke (Celia – the child).

3. FREEDOM – Monologue drama, as paranoid schizophrenic discusses with herself, how finally after twelve years, she achieved her freedom from her father. Better to remain locked up, so were her actions an act of mercy or cold blooded murder? ITC: Lady Penrhyn, Writer: Adele Shelley, Director: Angela Blake, Cast: Ali Crew

4. JOANNA – Joanna is the dangerous new girl, but is a quite insane female psychopath serial killer, and to stop her from continuing on her murder spree, must be kept permanently in the Jail Hospital in isolation. Instead she is jailed with the general population, and is attending the literacy unit, with a very inexperienced teacher who will soon find herself dead. ITC: Choufleur Productions, Writer + Director: Colleen Henry, Cast: Hilary Park (Joanna), Alice Furze (Jenny), Jennifer Hicks (Lisa), Gail Gray (Kylie)

5. TRAIN LINES – Comedy of coincidences, when two complete strangers meet at a city railway station. Connections because both discover that they are going to the same 23rd birthday party, but when will their delayed train finally arrive? Writer: Tremayne Gordon, Director: Matthew Popp, Cast: Emma Throssell (Rose), David Berry (Ash)

7. SOMEONE TO WATCH OVER ME – Yes this is the nanny state, and a most excellent comedy, as the generation gap grows ever larger. Nan (Neil Modra) is a complete control freak, and is a constant lecturer. Emma (Tanydd Jaquet) keeps on trying to hide her reality from Nan. ITC: RAPA Inc, Writer: Kaz Getts, Director: Warren Bradey

8. THE DISSOLUTION MASK – For the past fifteen years Brian (Lorenzo Ruru) has wondered why his adopted parent Linda (Elizabeth Routledge) kicked him out. This time without violence, the confrontation begins and the answers flow in this compelling drama. Writer: Nancy West, Director: Sharlene Zeederberg

9. CHEMISTRY TEST – Internet dating for the undateable. Ross (Dudley Levell) is a wolf who always fails to learn why he is female un-friendly. Carol (Lisa Hanssens) is a vixen who prefers first dates, because she never gets a second date. Both create internet dating profiles that are completely full of clever lies. With so many very funny dating lies, this delicious comedy, was an audience favourite. ITC: Crash Test Drama Sydney Winner, Writer + Director: Ruth Fingret, Cast: Lisa Hanssens (Carol), Dudley Levell (Ross)