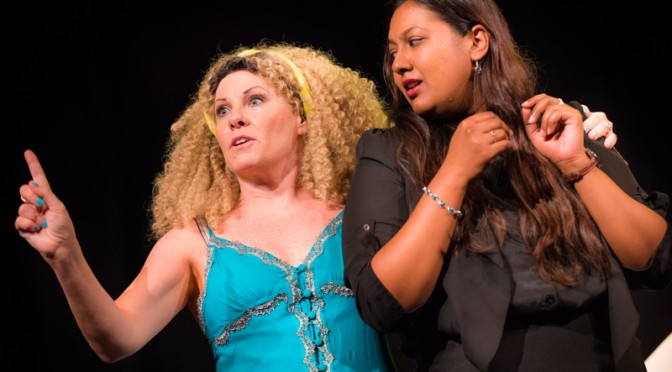 Production photography by Sylvi Soe, and displayed in performance order.

This is week four of the biggest little play festival in the world. 2016 is the fifteenth year of SHORT+SWEET THEATRE SYDNEY, with the plays running from Wednesdays to Sundays until the Gala Final on the 13th March.

(1) THE PERFECT INDEPENDENT FILM – A couple awkwardly wake up after a Christmas party, with no memory of the night before, and the comedy begins. They discover that they are in a movie within a movie, with the two writers capturing everything done by the couple. Writer: Trace Crawford, Director: Julie Zimmerman. Cast: Jim McInnes (Man), Sarah North (Woman), Lucy Smith (Writer 2), Tony Guyot (Writer 1)

(2) THE SHOEBOX – In the gardens of a nursing home, the mysterious shoebox. Just what is inside? Expectations aroused by wheelchair bound war veteran, so if Vic finishes reading GREAT EXPECTATIONS aloud, she will learn the secret. Having learnt the secret, her mother will be set the exact same task. ITC: Village Spirit Productions, Writer + Director: Kel Vance, Cast: Ashlyn Hunter (Vic), Saban Lloyd Berrell (Mr Dent – in wheelchair), Charlotte Hanson (Vic’s Mother)

(4) THE PITCH – Unsuccessful writer Ivan (Myles Waddell), pitches the idea for his latest film to his wife Rachel (Amanda Mikhael). Ivan describes his film and Rachel makes her way through a bottle of wine. A what point does the pitch become his plan to murder his wife? Writer: Peter Cox and Norah George, Director: Amelia Morris.

(5) THE REVENGE OF MR MEOWGI – After a date night on the town, young bachelor Dom brings the lovely Emily home and introduces her to his conniving cat Mr. Meowgi. Mr. Meowgi is determined to thwart his master’s efforts to get her into the bedroom. Extremely funny comedy, as Emily does not realise both Don and the cat, are arguing about her. Good riddence talking cat, replaced with a talking dog. ITC: Shady Side Projects, Writer: Tom Green, Director: Tom Green, Cast: Tom Green (Dom), Ellen Brooke Williams (Emily), James Hartley (Mr. Meowgi – the cat) Jed Clarke (Scruff – the dog)

(8) THE FINAL COUNTDOWN – For football crazy Josh (James Phipps) there is no contest, choosing which event is more important to attend, a wedding or the Grand Final. Girlfriend Katrina (Sally Williams) has chosen the perfect place for the wedding reception, as a surprise for her boyfriend. Josh continuously asks his loser mate, for a method to temporarily dump the girlfriend, but only for the day of the Grand Final. Laughter for each suggested badly considered course of action. ITC: Grinning Shark Productions, Writer + Director: Graham Yates.

(9) MATCH PLAY – Arriving for his first date, Jason (Mikey Sardis) is expecting to find a young woman named Heather, that he has been online chatting by typing. Instead he finds her gorgeous flirting mother, Ruth (Laura O’Neill) who predictably claims to be there to vet him, as a suitable candidate for her non-existent daughter. Yes of course, everyone dating online lies. Writer: Seth Freeman, Director: Jeremy Span.