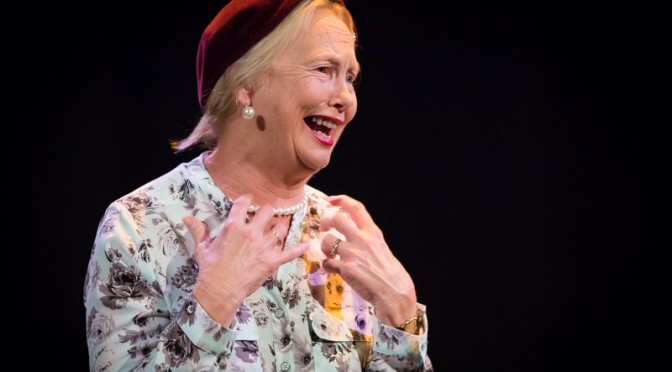 The biggest little play festival in the world. 2016 and this is the fifteenth year of SHORT+SWEET THEATRE SYDNEY, running Wednesdays to Sundays, from 6 January 2016 to 13 March 2016 with the very best returning in March at the Gala Final.

All the heats have finished, and this week is the first round of finals. There are eleven just simply superb plays this week, providing two great monologues and both drama and laugh-out-loud entertainment galore, presented in the ten minute play format.

(2) THE SCULPTURE GALLERY – Wildcards Week 1 – Drama hypothetical set inside a marble sculpture gallery. As the Photographer uses his camera, discovering everything provocative, that is only ever in the eye of the beholder. Writer: Aoise Stratford, Director: Don Lacey, Cast: Laura Nash (Kennedy), Peter Brown (Jack), uncredited (the Marble Sculpture), uncredited (voiceover)

(4) THE SHOEBOX – Top 80 Week 4 – In the gardens of a nursing home, the mysterious shoebox. Just what is contained inside? Expectations aroused by the charming wheelchair bound war veteran, so if Vic finishes reading aloud GREAT EXPECTATIONS, she will learn the secret of the shoebox. Having learnt the secret, her mother will be set the exact same task. ITC: Village Spirit Productions, Writer + Director: Kel Vance, Cast: Ashlyn Hunter (Vic), Saban Lloyd Berrell (Mr Dent – in wheelchair), Charlotte Hanson (Vic’s Mother)

(5) BETWEEN OLD FRIENDS – Top 80 Week 1 – Two high school girl friends, are now mature women with families. They suddenly meet up again because of Facebook web pages. They are lunching at a restaurant chosen by Samantha (Lisa Hanssens) that is just too expensive for Jeanine (Alison Grace). Were they ever actually friends, or perhaps only acquaintances? Find out just exactly how much their past relationship is actually worth. ITC: The Performance Crew, Writer + Director: Wendy Crew

(8) MUM AND DAD – Wildcards Week 2 – Tyla (Holly) is a very young girl, and despite the knowledge of domestic violence from her father Michael (Bob Deacon) against her mother Sammy (Natalie Freeman), remains both cheerful and strong throughout the struggle of living at home. Writer: Ashley Milne, Director: Ayla Camille De Anastacio

(9) RED EYE TO BANGKOK – Top 80 Week 3 – Comedy mayhem during the minutes before the aircraft takes off to Bangkok, so how many weird phobias can this female passenger have? There is no escape, from the nightmare departure scenario, that gets funnier by the second. Received well deserved applause from an appreciative audience. ITC: Crash Test Drama Cronulla, Writer + Director: Susan Turner, Cast: Jay Duncan (Brad), Melissa Myles (Jeanie), Haki Crisden (Omar)

(10) SAME TIME NEXT WEEK – Top 80 Week 8 – Perfectly directed and performed domestic violence drama monologue, in one voice. Brave choices in lighting states achieved the maximum possible impact, to illustrate the multitude of scars from an extremely violent childhood, and all of the suppressed violence within, released via alcohol. Past violence by his father, ultimately generated violence by the son Alan (Dudley Levell) to his wife of five years, Jenny. Concussion, bruises, three broken ribs, gbh, avo, and just so much more. Writer: Dudley Levell, Director: Valentino Arico

(11) WHO WANTS TO BE A CHANNEL NINE INTERN? – Top 80 Week 2 – A laugh out loud comedy, with a truly outstanding performance by Davey Reynolds as “Bryan from HR” as the interviewer. Chris Heaslip (Matthew) arrives for his job interview, that immediately turns into a rigged television game show, including a very weird “phone a friend”. The unanswered question is, who actually wins the game? With a very witty script, and believable performances, this was definitely a constant crowd pleaser. DIRECTOR: Dave Reynolds WRITER: Chris Heaslip ITC: SlipDavey