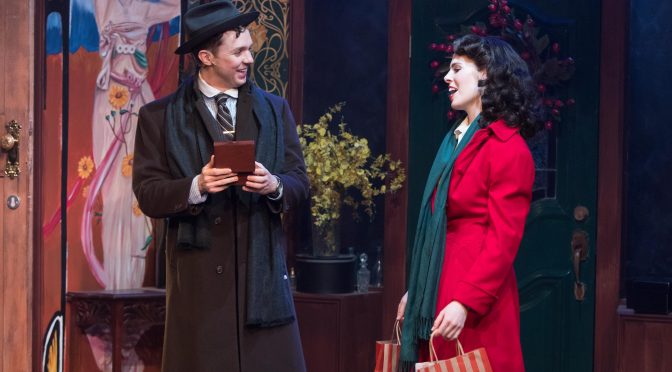 Late to the party.  I was late to the swell party that is SHE LOVES ME at Hayes Theatre. Don’t make my mistake because this is a show for which reviewer words like elegant and accomplished were invented. Flag down a taxi carriage in the thoroughfare and whisk yourself off to the local pantages immediately.  Without a hair out of place or any discreet top lip perspiration, this production exemplifies class and style in the performances, the music, the choreography and the design and tech.  It barrels along with some stunning tour-de- theatre sequences, warm and engaging characters, and songs to soothe and envelop.

Set in the 1930s in a Parfumerie in Budapest the story weaves around the staff of the sweet-smelling shop and their struggles in love.  Mr. Maraczek who still adores his wife after all their years together has a highly trained and capable staff.  Head clerk Georg Nowack is loyal and committed but a little misplaced by Cupid.  He is searching for romance and thinks he has found his heart’s desire in a Lonely-Hearts Club letter writer who he, one day, hopes to meet.  His daily work struggles though are compounded when the fast talking, think on her feet, highly intelligent, eager new employee Amalia Balash joins the team.  No love lost between these two.

If this summary is sounding a bit Tom Hanks, Meg Ryan in flavour it’s because there have been several screen versions inspired by 1937 play Parfumerie by Hungarian playwright Miklós László, including You Got Mail. Music by Jerry Bock, lyrics by Sheldon Harnick and book by Joe Masteroff, SHE LOVES ME was nominated for five Tony Awards in 1964 and subsequent revivals have won Drama Desk and Olivier and Critics Circle awards. The show is sweet and funny and enjoyably affected and this production is brought to the Hayes by their inaugural Artist Led Production Initiative.

Enchanting in every aspect, Director Erin James has created a show that is smooth and lively. Every cast member is a triple threat and the visual conceptualization is breathtakingly good. (Production Design: Isabel Hudson) James has a phenomenally talented cast here but she takes their work above mere excellence with an attention to detail second to none.  Every relationship is clear and nuanced, every movement is indicative of character and propels the story and some the static, onlooker tableaux are hilarious to watch.  And the scenes where the cast perform clockwork manoeuvres of the mercantile kind are stunningly well designed and executed.

Rowan Witt is so charming in his role as Georg.  Without being wishy-washy he brings such charm and grace to the soft-spoken clerk.  There is a reality and groundedness to his portrayal which has no off putting overt yearning or sloppy sentimentality.  His creation is human and competent and relatable and his vocal work, especially in the letter sequences is so enjoyable.  By comparison, Caitlin Berry’s Amalia is brash, confident and vulnerable by turns.  And her comedy chops are well on display in the shoe sequence.  She is funny and fragile and a delight to watch.  Plus the rapport between them very nicely explored and grown .

As is Zoe Gertz’ Illona, another of the clerks in the shop.  She is bold and modern in her way and we totally relate to her disastrous adventures in love and want the best for her despite her poor choices.  She moves with grace and style unlike the aspirational delivery boy Arpad, Joel Granger , who gives us a galumph of boyish enthusiasm and a big heart.  Maraczek (played with considerable command from veteran Tony Llewellyn-Jones) has a staff rounded out by Kurt Phelan’s philandering, sleezy Kodaly who gives venality a bad name and an absolutely hallmark performance from Jay James-Moody as the meek seeming Ladislav and as the waiter in another sequence.  His work is pinpoint in both pathos and primping and nestles so well into this stellar ensemble.

Completing the cast is Suzanne Steele and Georgina Walker and the quality of these artists’ stagecraft is jaw dropping.  They constantly arrive as new customers and the costumes, and shoes and hats, just keep on coming … oh the detail!  Small star hairclips, watches, and the subtlety of Christmas green and red.  I love Hudson’s work!  And the quick changes.  It is such an art to appear on stage after a such a frenetic change with nary a breath, note or expression anything but calm.  Fabulous!  The choreography (Leslie Bell) is so complex as well but designed to maximise the small space and foreground the multifaced skill of this ensemble.  The Tango was my personal favourite but there are several sequences that will make you sit back in awe before exploding into applause.

And behind the scenes Musical Director Steven Kreamer and his band build a superb bedrock for the work of both the individuals and the ensemble.  His choice of instruments and keyboard stylings gives a period feel to the audio (Designer: David Grigg) which was extremely well mixed last night.  That reverb in ‘Vanilla Ice Cream’ was perfection.  And the lighting is great too (Matt Cox), understated without any disjointed modern colours it gently guides the eye to the main action.  Quite a necessity when there is so much going on.

SHE LOVES ME is a feast for the senses that is not to be missed.  It is playing at the Hayes Theatre until 22nd September and if you fail to fall in love with the production I will be very surprised.  But true love is often elusive and you may find it slip out of your grasp if you don’t book quickly.  This is a show that the phrase ‘sell-out hit’ was invented for. 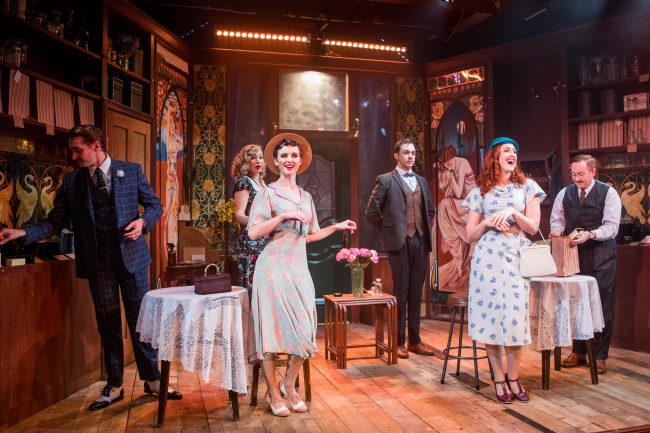