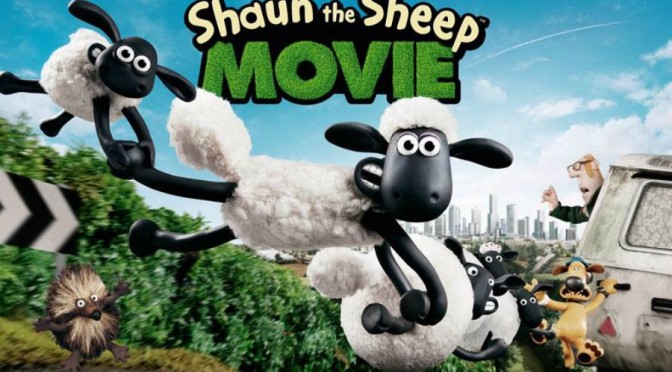 Shaun the Sheep made his debut in 1995, when he appeared in Nick Park’s Oscar®-winning short film A Close Shave, starring Wallace and Gromit. It made its debut TV on Christmas Eve 1995, attracting BBC-2’s largest audience for that whole year. Shaun had a small but significant role in the story, during which he rescued Gromit, who had been imprisoned for sheep-rustling.

Twenty years later and following a flock of mini bite a television shows featuring the woolly wonder, SHAUN has his own feature film, called the bleating obvious, SHAUN THE SHEEP.

For those not in the know, Shaun is in the mow, a clever, mischievous sheep who lives with his flock on Mossy Bottom Farm, under the nominal supervision of The Farmer, and Bitzer, a well-meaning but ineffectual sheepdog.

Despite Shaun’s best efforts, life on the farm has got into a bit of a rut, – actually, that’s the problem, there doesn’t seem to be any rutting- and Shaun concocts a cunning plan to have a day off. But Shaun’s mischief inadvertently leads to the hapless farmer being taken away from the farm. With the flock’s help, Shaun must leave the farm for the first time and travel into the Big City in order to rescue The Farmer.

Sheepless is the city, no cattle, and silent as the lambs, can these ruminants avoid being recognised as sheep and thus avoid the clutches of a fearsome animal catcher? Perhaps disguising themselves as a pantomime horse will help.

In the course of an action-packed adventure they experience a host of wild, funny mishaps, as well as a poignant, pivotal plot point when Shaun meets a little orphan dog called Slip who makes him realise that having a home and a family is not something to be taken for granted.

Written and directed by Mark Burton Richard Starzak, combine their comedy chops to serve a multitude of rib tickles and ensure SHAUN THE SHEEP is not a cheap one trick ovine to fleece you.

This film is a shear delight, and ewe won’t mind at all having your eyes pulled over the wool. It has all the hallmark qualities of the Aardman production company – puns, sight gags. For instance, the job opportunities that come from a lifetime spent shearing sheep has the farmer become a trend setting big city barber – or should that be baa baa?

Ostensibly a silent film, meaning no dialogue, SHAUN THE SHEEP has one of the best song scores in recent cinema, one could almost classify it as a musical.

Daggy, shaggy, and unashamedly full of sheep, SHAUN THE SHEEP deserves and demands audience flock in droves, to be seen and herd, to see and hear.