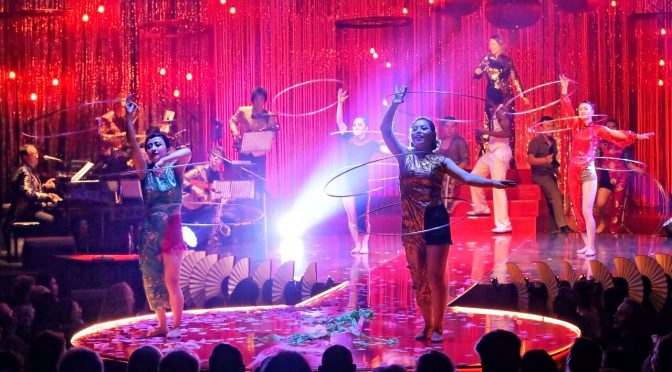 Sure to be one of the big hits of the Sydney Festival, SHANGHAI MIMI is a lush, well- conceptualised production.  It has terrific attention to detail in the creation of the space and artists of considerable skill and charisma.  If I wasn’t the best audience for the work, it’s apparent that the show has wide appeal and the power to draw a diverse viewership.  The cast introduces themselves at one stage and they are certainly from all over.  And I think the lady of Asian descent who was sobbing with recognition as we left the auditorium, would take me to task for my lack of appreciation.  What this lady understood was the importance of this work in reclamation of a period of time and the presentation of it to a new audience.

The music of this production is its backbone, the impetus being some long forgotten Chinese pressings of a music style called shidaiqu which blends the traditional with jazz.  Placing the show in Shanghai in the 1930s, Director Moira Finucane and Creative Producer Douglas Hunter have extended beyond the songs to flamboyantly include cabaret and acrobatics and some circus.  The Qinghai Acrobatic Troupe and the ensemble join singer Sophie Koh to provide some attractive dancing, some deft circus and emotive singing, predominantly in Mandarin but also in English.  A small band of distinction flavours the show with live Chinese jazz showcasing trumpet and clarinet solos in true jazz style.

Beautifully decorated, the theatre has an extravagantly period feel at first entry with large glowing paper lanterns in red and gold, a stage thrust into the audience and a soundscape of busy period traffic and antique car horns.  It’s an evocative beginning and the cacophony increases to herald the production with a flourish. After the audio mix settled, it was smooth jazz from Kok to introduce the enticingly mellow style of production.

There are acts which are fast and furious, like the synchronised green diabolo hurled into the air, but many are luxurious and sensual.  The work of the couple on the Chinese silks has a sweet story hidden in the poses and the use of a mechanical winch rather than a traditional tether does nothing to mitigate how death defying it is.  The skill is appreciable in all the balances, hoop twirling, plate spinning, jar juggling and strength turns on show.

The acts, though, are generally are not tied together with story, somewhat disparate in their placement and can sometimes feel like background to the songs.  The cabaret feel is emphasised by how much singing there is, delightful as it may be.  The dancing is lovely to watch but one dance is explained for its mountains and eagles and the extra depth that brings to one’s engagement in the movement and the narrative of the couple’s sinuous pairing is very moving.

Costuming maximises sparkle in many places with a traditional flair, with one surprizing departure.  Lighting hovers in the red for ambiance without losing the necessary white on the artists and the audio mix really comes into its own after a muddy start. Having live musicians on stage is so enjoyable and Musical Director John McAll has orchestrated the music so that it unobtrusively remains in concert when a performer has a fail-and-repeat or they require a longer set-up than usual.  That is very clever discreet musicianship.

There is much to enjoy in this world premiere of SHANGHAI MIMI and the Festival website suggests that it is nearing capacity booking so many patrons will have a chance to see this detailed and stylish evening of vintage jazz before it is inevitably swept to an international stage.

SHANGHAI MIMI continues as part of the Sydney Festival until January 20. 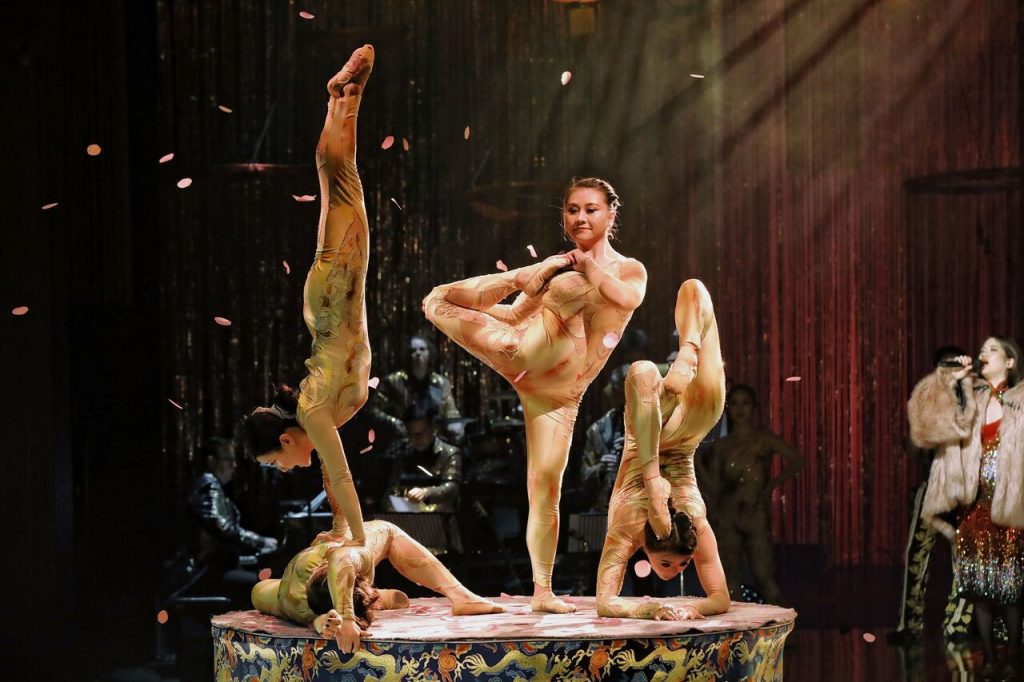