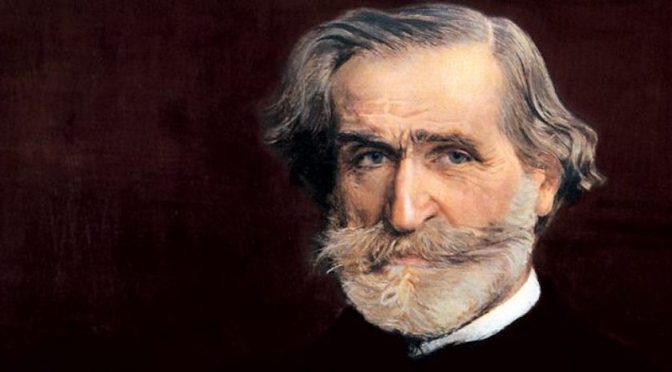 The story of Verdi’s Shakespearean operas is not the operas he did compose but the one that he longed to set to music all his life but never somehow managed.  And that was King Lear. Verdi loved Shakespeare. He always carried an Italian version of Shakespeare’s plays with him and for a long time had envisaged setting the play to music.  He talked to his librettist about it constantly but never made any concrete attempt to fulfil that dream.

For a composer who wrote 28 operas, Giuseppe Verdi continuously complained of having to write music for a living.  As time went by, following his purchase of Sant’Agata his frustrations grew worse. All he wanted to do was devote himself to farming.  He used various reasons with the opera companies and his publisher, Ricordi, to try and weasel himself out of contracts, from being unable to work with some singers or the libretto wasn’t ready in time or he didn’t like the set or the costumes etc etc.

But in the case of Shakespeare’s Macbeth he seemed relatively happy although he did whinge about the soprano chosen to sing Lady Macbeth.  Eventually he settled for Marianna Barbieri-Nini. His librettist was Francesco-Maria Piave and his instructions to him were precise: short verses and “concise sublime language, except for the witches’ chorus” which had to be coarse.

He also had specific instructions for the singers.  To the baritone Varesi, who was to sing Macbeth, he instructed ‘I would prefer you to serve the poet rather than the musician.’  Barbieri-Nini later wrote: ‘there were more than a hundred piano and orchestral rehearsals … to him the two most crucial scenes were the sleep-walking scenes and my duet with the baritone.’  The latter took 3 months to learn because Verdi expected the aria to be more ‘speech than song.’ Later, at another performance in Naples he advised the soprano to make her voice ‘diabolical’ and added ‘I should like Lady Macbeth to look ugly and evil’.

Verdi revised the opera twice but the premiere on 14 March 1847 received several ovations and the arias that Verdi had devoted so much time had to be encored a few times.

Otello proved to be one of Verdi’s best operas.  At first he was wary of composing, especially as it had been 16 years since his last opera, Aida.  But Ricordi enticed the 74 year-old composer out of retirement by dangling a couple of incentives he knew Verdi would find irresistable – the choice of his own play and Arrigo Boito as his librettist.  Boito was almost a soulmate of Verdi’s – he was a poet, journalist, novelist, librettist and composer of the opera Méfistofele which premiered in 1868.

The opening scene of Otello pitches us straight into the storm scene which sees the Moor surviving a shipwreck.  There are echoes of racism throughout the opera and Otello is very conscious of how his subjects feel about him.  Iago, his lieutenant, preys on those fears.

Verdi’s orchestration and his balance between recitative and action is impressive.  People say Verdi had been influenced by Wagner. He may have been, but Verdi’s use of brass to emphasise the various dramatic moments is highly effective.  The love duet ‘Gia nella notte densa’ between Otello and Desdemona is an enthralling and sensual duet while the final aria ‘Niun mi tema’ shows us Verdi displaying a touch of genius by replaying part of that love duet as Otello is dying.

The story of Falstaff, almost faithfully based on Shakespeare’s play, with the addition of a few scenes from Henry IV parts 1 and 2, is the story of Falstaff trying to seduce Alice Ford and Meg Page and the lengths these ladies are prepared to go to teach Falstaff a lesson.  Alice’s husband Ford complicates matters by overhearing the ladies talk and decides to take matters in his own hands. Disguised as a Signor Fontana he implores Falstaff to seduce his wife, who agrees. Whereupon Ford is consumed with jealousy and sings the only complete aria in the opera ‘O Sogno O Realta’.  The other aria sung as a duet by Ford’s daughter Nannetta and her suitor Fenton (whom Ford disapproves of) is sung twice but is never completed. In between Falstaff visits his intended ‘victims’ and is forced to hide in a laundry basket when he hears Ford approaching. The basket is eventually tipped into the Thames with Falstaff still in it.

The climax of the opera is a rendezvous in Windsor Park between Falstaff and his conquests-to-be with Ford plus Nannetta and Fenton and a motley crew of others dressed as elves and fairies.  It finishes off with a jolly old fugue (unaccompanied) and Fenton marries his Nannetta and obviously Falstaff is forgiven.

Boito had written to Verdi: “I should like to sprinkle the whole comedy with that gay love, as one would sprinkle sugar on tart”.  The opera certainly has an effusion of gaiety and is aided and abetted by a boisterous brass orchestration.

Falstaff was premiered at La Scala on 9th February 1893 and received some mild success but it did not curry favour with the public until Arturo Toscanini conducted the work throughout the world and the opera was then recognized as one of Verdi’s masterpieces.