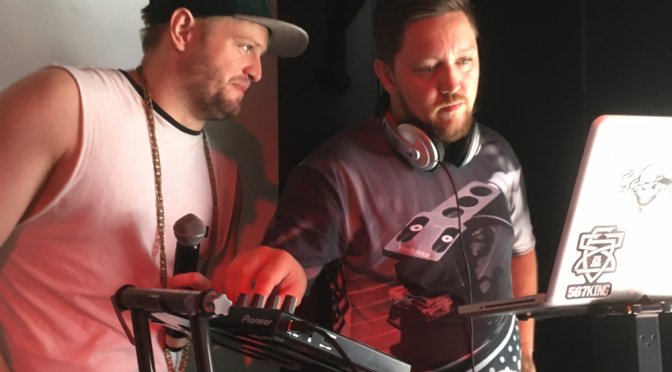 Thanks to my busy life I found myself in a very rare circumstance today.  When the media release from The Leftovers Collective came in I saw ‘Shakespeare’ in large friendly type and thought … I’m in!  Later, the other largish and encouraging letters tumbled themselves into vocabulary.  Shakespeare Dance Party Rap Battle it said.  I express a bit of surprise at my next thought … Why the hell not?  Jep.  In.

The Shakespeare knew no gender barriers and Juliet and Lear and the Henrys, even a sonnet or two took the mic.  More arcane offerings like Troilus and Cressida also made an appearance.  Mind you I’m unsure that Lear actually said ‘fucking foul rage rage’ but interpretation is all.  ‘Bring it bitches’ and ‘drop the fucking beat’ have an iambic feel.

Henry’s breach, dear friend, was the winner in the mouth of Bard Bitch, aka Gemma Scoble and pictured below, after a fantastic one- on-one battle with Queen T.  Those women simply owned it and I would not want to be making any decisions, there wasn’t a pentameter between them in my view.  Competition is fraught.   And this event has a role on a web series Ang Wilson [Facebook]) as the prize. The nature of competition and performance is addressed in a kind of manifesto in the program notes.  It’s a big discussion but the Leftovers Collective is built on “disruptive art”.

The contest element was further blurred by the infusion of cream pies.  No one escaped and, probably due to the short sharp nature of the event (ergo: no drunks), the artists took it in their stride and there was a lot of good humour in the small space.  It really was a lot of loud, raucous, fun.

A woman I met at the event was quite sure that her hatred of Shakespeare and her hatred of Rap would align nicely.  I hope she was won over by the terrific performances and the supportive spirit of the audience.  I thoroughly enjoyed myself.