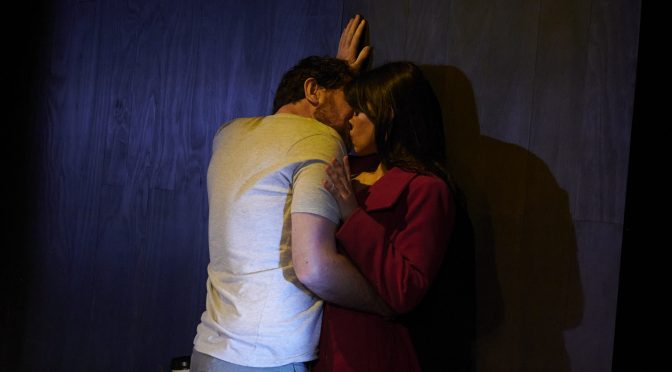 Whilst watching Canadian playwright  Hannah Moscovitch’s SEXUAL MISCONDUCT OF THE MIDDLE CLASSES, there was another play that was running around in my head. It was American playwright David Mamet’s play OLEANNA.

The similarities between the two plays lie in that they are both very dramatic two handers and that both feature a rather precious middle aged male academic and a feisty young female student. Both plays pivot around the issue of gender politics.

Back in September 1993  I reviewed the Sydney Theatre Company’s production of Mamet’s play at the intimate Wharf 2 venue. It was directed by one of the greats of Australian theatre  Michael Gow and starred Geoffrey Rush, already an acclaimed international star, and a young Cate Blanchett, fresh out of NIDA.  It was an awesome production, one of my highlights from writing about Sydney theatre for over thirty years.

The combination of Mamet, Gow, Rush and Blanchett put the STC production in another league. Not withstanding this, the Melbourne Theatre Company production, hosted by Belvoir Street Theatre, was a very fine production directed by Petra Kalive and starring Dan Spielman and Isabella Yena,

Mamet’s play premiered in 1992.  I remember how it ended. Rush’s John is on the phone to his wife whilst Carol is in the room. He affectionally calls his wife babe. He gets off the phone and Carol harangues him, don’t call your wife babe. John loses it and goes over to assault her and just stops in the last minute.

There’s a bigger picture to all this. In Moscovitch’s play Jon knows that he should stop before he gets involved with Annie but he doesn’t resist the temptation. In another scene he tells her not to wear her red coat to his lectures.

SEXUAL MISCONDUCT OF THE MIDDLE CLASSES is playing upstairs at Belvoir Street Theatre until 10th July 2022.

SEXUAL MISCONDUCT OF THE MIDDLE CLASSES