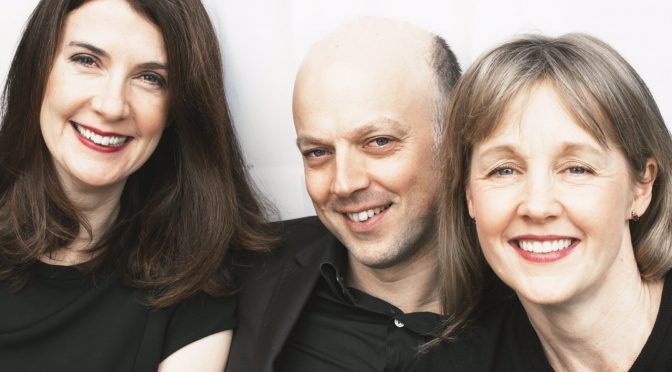 Sunday afternoon and the Utzon Room was sold out for the return of the Seraphim Trio. Founded and based in Adelaide, the players: Helen Ayres (violin), Tim Nankervis (cello) and Anna Goldsworthy (piano); have been friends and work colleagues for more than 20 years.  This longstanding collaboration results in music that is beautifully in sync, tenderly sensitive and responsive to each players’ expression of a phrase. There is a good reason for their large fan base.

Joining the Seraphim Trio for this performance was Principal Viola of the Melbourne Symphony Orchestra, Christopher Moore. His playing was excellent, as expected, and fitted beautifully into the dynamic of the group.

The concert started a little late and, although you would expect more audience members to know the protocol after all these years, there were still some loudly clicking away taking photos over our heads during the first and second movements of the opening work. Prior to starting, the Opera house had a recorded welcome from the Original people – odd that the recording said they acknowledge us rather than us acknowledging them – but the recording didn’t ask for mobiles and cameras to be set to silent. This meant the poor usher was scampering from one place to the next asking audience members to stop taking photos. Thus, it took a while for the audience to settle down and focus on the performance.

Another slight hindrance was the lack of a paper program for the performance. The only access was via the internet which the audience was encouraged to view on their phones. This hampered their concentration initially and was accompanied by various burps and bings as phone messages arrived. The writer was near the back of the room on a level floor so cannot offer any observation of the visuals of the performance.

The opening work was one from a rarely heard composer. Countess Maria Theodora Paulina Pejačević preferred herself to be called simply Dora and was born in Budapest in the 1880’s. She was of noble Croatian descent and taught piano at an early age by her mother who was a highly competent musician. Veering away from an aristocratic lifestyle, Dora was creating complete compositions by the time she was 12. Her parents supported her choice to be a composer and gave her an advanced music education in Zagreb, Croatia; Dresden and Munich, Germany.

Pejačević published more than 100 works from songs and chamber music up to a full Symphony – considered the first modern symphony for any Croatian composer. She passed away at only 37 years of age, a month after giving birth. She is yet another composer where we ponder over what other wonderful works she might have written had she survived longer.

The work opening the concert was her Piano Quartet in D minor, Op. 25, a highly enjoyable piece with a lively launch, sometimes romantic, sometimes mischievous. It was an ideal opening item to soften up the audience. There were four movements, beginning with an Allegro which rolled along as beautifully as the waves of Sydney Harbour seen in the background. Then, a rather sentimental Andante con moto, a playful Allegretto grazioso with strong playing from Moore and Nankervis, completed with a cheeky little Allegro comodo. This included a concise pizzicato section beautifully executed by the ensemble. There were a few opportunities where the work could have languished a little more but the group decided to move things along instead. I suspect they may have more likely taken advantage of this had they begun on time with a more settled audience. By the end of the work, however, the audience gave the generous applause it deserved. Goldsworthy said the group liked exploring little known female composers and we were very glad they discovered Pejačević. I hope we get to hear a lot more for her work in the future.

The second work was commissioned by one of Seraphim Trio’s “Archangel” friends, John Bowan.

Australian composer Brett Dean composed the work last year between lockdowns in West Berkshire, UK. He returned there after an unfortunate trip home to Australia landed him with Covid symptoms. Although he was aiming to avoid the tragedy of a world in lockdown influencing the work he wrote, it is hard to ignore when you are ill. Dean worked the idea of his “Imaginary Ballet” around a cycle of dances with quieter interludes in between. The overall work was tense and disturbing, sometimes violent, other times dissident and whining. A few times Goldsworthy stood to hammer or drum the strings of the piano on the inside with mallets. The piece felt well rehearsed though the audience was again unsettled by the completion of the 20 minute piece.

The closing work was a more familiar classical style from Mozart, his Piano Quartet in G minor. Here, the audience visibly relaxed back in their seats. More eyes were closed, smiles, nodding of heads, much more enjoyment.  The opening movement was unusual in having the viola lead the way in certain parts. It was accompanied by a magnificent old sailing ship passing by in the background on the harbour.

The Andante movement was lovely, followed by a very joyful Rondo to finish. Each musician offered an outstanding performance. The audience gave much applause, drawing them back out for a second “curtain call”.

We love having Seraphim Trio visit Sydney. They are well supported and much loved here. Violist Christopher Moore was a great addition and a real treat. They will be returning to Sydney at the end of August for the Sydney Mozart Society. I recommend you book early if you want to join in the fun.