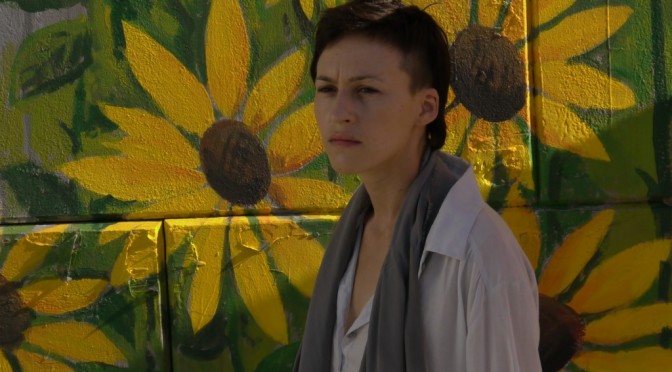 A young suicide bomber asks when his assignment might come through as he has a maths exam imminent and wonders if he needs study for it. “My father will kill me if I fail the test” he explains.

This black absurdism snakes through Shir Geffen’s SELF MADE, the film chosen to open this year’s Israeli Film Festival in Sydney on August 21.

Michal, a renowned Jerusalem artist wakes with a start when her bed collapses. The event is synonymous with her relationship with her partner. The bed has also become barren since Michal had her ovaries removed as an expression of her art.

Michal orders a new bed from ETACA, an IKEA type store, but on assembly finds a screw missing.

Michal reports the absence of the screw and Nadine, the Palestinian woman responsible for packing the widgets is summarily sent packing. Nadine is the antithesis of Michal. She wants children, imagines being pregnant, has no partner. Chillingly, she admires her “bomb bump” she has strapped under her dress when she thinks martyrdom is more a possibility than motherhood.

The women find themselves at the same border checkpoint and a mix up after an incident there has them change identity. To the audience, there is no apparent change in their appearance but their lives go into vice versa, with interesting consequences.

Awash with self-assembly kits and bathtub crustaceans, SELF MADE boasts two excellent central performances – Sarah Adler as the addled and screw loose Michal is beguilingly bewildered and Samira Saraya simply simmers as the lovelorn and confused Nadine.

SELF MADE – the original title translates to SCREW, but the producers didn’t want uncouth connotations attached to it – is Shira Geffens follow up film to Jellyfish, on which she collaborated with her husband, Etgar Keret.

Anyone who has enjoyed Keret’s stories will be in tune with Geffen’s narrative sensibilities – ironic, absurd, and reflective of the dreams and nightmares of living in contemporary Israel.

There has been a call for audiences to boycott the Israeli Film Festival in the light of recent events in Gaza. Such a ban would be counter intuitive to the work of these film-makers, inspired by the belief that their films can bridge political and cultural divides even if their leaders appear unable to do the same.