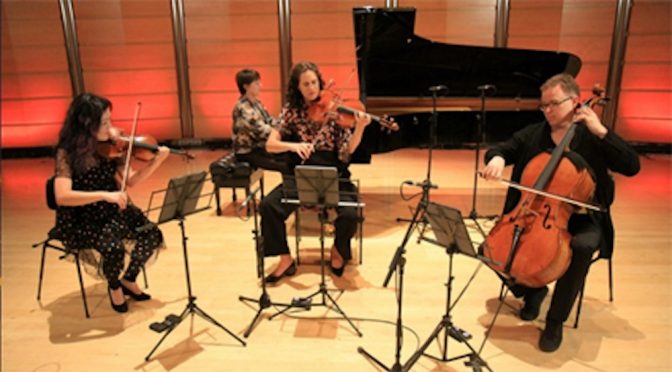 First we heard the marvellous Schubert (1797 – 1828) ‘Piano Trio in E-flat major for Piano, Violin and Cello, Op. posth. 148, D 897, Notturno’. This was composed in 1827 but only published decades later, as what the publisher decided to call Notturno. And yes there is a night time like atmosphere.

The short piece, full of Romantic Sturm und Drang began with soft piano and quivering, crying strings . Selby on piano kept up an insistent rhythm under the fragile strings. The work alternated between tempestuous, furious discussion and rippling piano with shimmering strings. It is the harmonic changes that add the tension in the work.

Then came the powerful Shostakovich (1906 – 1975) Piano Trio in E minor, Op. 67 (1944). This was written in 1944 as a memorial for Shostakovich’s close friend musicologist Ivan Sollertinsky and as a requiem for all the victims of the Holocaust. The performance by the trio was shattering, almost overwhelming.

The first movement is achingly exquisite with mournful, sobbing strings, the piano rumbling in agreement. The mood lightens a little and becomes sharp, tumbling and tempestuous with passionate flurries – there is a jumpy, nervous and edgy atmosphere that settles to become a little calmer.

The fast, furious and tumbling second movement has an explosive, emphatic opening with skittering violin while the piano scurries to keep up.

The third movement hears a full-bodied ,forlorn piano with a rich, melancholic violin which the cello joins. The piano is like a pulsating heartbeat, while the strings sing a sorrowful aria.

The piano then becomes ominous and insistent like a drum or an army marching while the strings are furious, tumultuous and tempestuous. The piano develops a circular melody with elements of Jewish dance music, then becomes a little more composed emotionally but still very sinister before the work concludes with a sigh.

The first movement began with hesitant piano and low murmuring strings, then features brisk and emphatic strings and an assertive glistening piano that flamboyantly shows of with scurries and flourishes. ominous oozing strings then merge into a sharp tumbling tempestuous whirlpool of emotion interspersed with small yearning segments.

The cello opened the agitated second movement, breathless and speedy, then was joined by the viola and violin. The piano floated and rippled against the swaying rhythm of the strings. At times, it sounded like raindrops.

In the third movement, the strings were very strong but slower and with an aching feeling.The piano shimmered. Then there was a dialogue between the three strings, the piano adding accompaniment. A sudden change to a waltz-like rhythm followed, then back to a slow oozing and flowing melody, while the piano delicately scintillates.

The fourth and final movement began sharp and spiky, then there was a return to more scurries and flurries full of resonant counterpoint, leading to a very energetic quartet discussion, the piano insistent, taking us to an emphatic, dramatic end.