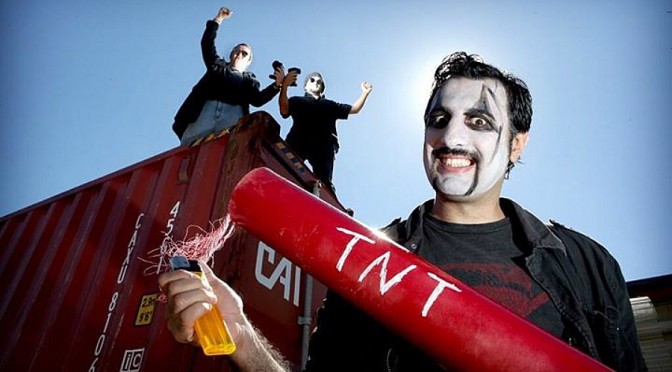 Seizure Kaiser’s sold-out smash hit from the 2014 Sydney Fringe, his sarcastic and cynical show GUTLESS about being a cancer survivor, was critically acclaimed and he has now brought it back as part of the current 11th Sydney Comedy Festival.

Seizure Kaiser is still enjoying his fortunate life as a cancer survivor, and now delivers his latest maniacal comedy routine with a twist, encompassing the hilariously dark and completely true story of his dangerous high risk lifestyle during his twenties.

His humour is infectious and contagious, and his audiences easily produce the sound of roaring laughter. Equally fun and entertaining plus crude and rude, and using cheeriness and mirth, Seizure Kaiser is easily able to get away with jokes that other Australians wouldn’t dare deliver.

The audience was fabulous on the night of the show and was laughing continuously, and two fresh bright sparks seated in the front row, easily added to the mood and let the show go into unexplored territory, bringing even more laughs.

The last joke of the night, made the admission price an absolute bargain. You will find yourself repeating the joke to many of your friends.

With his personal cancer message piece that uses stand-up comedy to reinforce the “go to your doctor” immediately when anything changes.

Kaiser excels with an appreciative audience, and can be seen in THE BUNKER, the spacious 60 seat studio space, downstairs at the FACTORY THEATRE, 105 Victoria Road, Marrickville.

Seizure Kaiser will be presenting his stand-up show, at The Edinburgh Fringe Festival in August 2015.