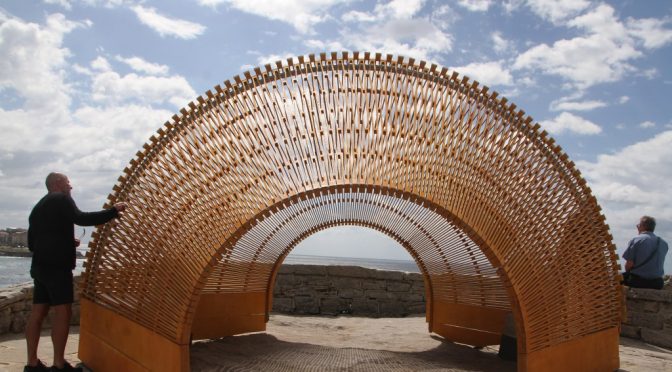 SCULPTURE BY THE SEA is the largest annual sculpture exhibition in the world and the 20th October 2016 marked its twentieth anniversary. David Handley, the Founding Director, welcomed a 104 artists from 17 countries and new members of the Decade Club Jane Gillings and Richard Tipping as well as 35 artists exhibiting for the first time. The 20th year also sees the  2000th sculpture exhibited on the Bondi coastal walk. By the end of this years event it is expected that 500,000 people will have visited it.

As a birthday present the New South Wales Government announced a tourism initiative that would bring together the sculpture collections of the Royal Botanic Gardens, the Domain, North Sydney, and Georges Heights under the title of Sydney Harbour sculpture collection. A website is to be built in coming months showing visitors how to explore Sydney Harbour’s foreshores through the world of sculpture.

The winner of Australia’s most lucrative annual acquisitive prize was Johannes Pannekoek for his work Change Ahead which is made of rusted corton steel manufactured in the artists’ Gooseberry Hills studio in Western Australia. Pannekoek missed the deadline to freight his work from Perth to Sydney so he loaded it onto a trailer, placed a pink ribbon on it, Priscilla Queen Of The Desert style, and drove it across the Nullabor Plains, arriving in Bondi three days before the event started. The $60,000 Prize made it all worthwhile. Furthermore the winner’s work will be given to North Sydney Council and placed on permanent display.

This years’ exhibition was also dedicated to the memory of Inge King who died earlier this year aged over 100 years with the inclusion of two of her works in this years’s event.

SCULPTURE  BY THE SEA and SCULPTURE INSIDE run until 6 November 2016.