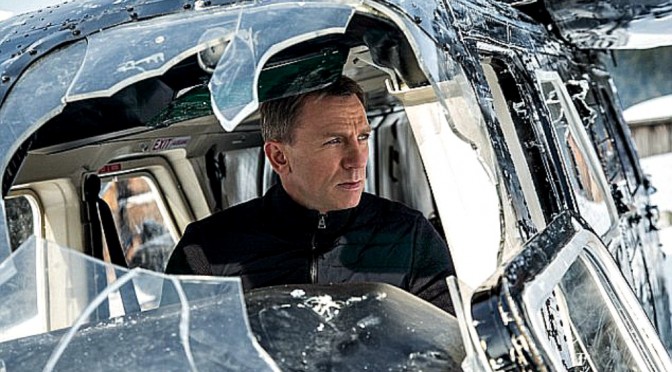 For the first time in four films, the gun barrel is back to introduce James Bond in SPECTRE. It’s a blast from the past as is the title, SPECTRE, the name of the organisation 007 is pitted against from the beginning of his cinematic inception more than 50 years ago.

SPECTRE’s plot structure presents a pastiche of the James Bond films, the opening sequence set during the Day of the Dead in Mexico City strikingly evoking the voodoo imagery of Live and Let Die.

Gorgeously photographed by Hoyt van Hoytema, it is a stunning set piece of macabre mask and costume which infuses the sequence with disguise and intrigue. Featuring a terrifically timed tracking shot, the sequence delivers big bang for your buck including the first big out loud explosion of laughter courtesy of a comfy choreographed sight gag.

The title sequence’s leitmotif is an octopus, the insignia of SPECTRE, obviously, but it is interesting to note that a paragraph from Ian Fleming’s posthumously published short story, OCTOPUSSY, provides the nutshell for the nemesis of James Bond in this latest screen story.

“James Bond looked Major Smythe squarely in the eyes. ‘It just happened that Oberhauser was a friend of mine. He taught me to ski before the war, when I was in my teens. He was a wonderful man. He was something of a father to me at a time I happened to need one.’”

It is not the Major who is the kernel of the narrative, but Oberhauser, a relic from Bond’s pre-adult life, a spectre summoned from the ashes of Skyfall. The film sidesteps Smythe and makes Oberhauser’s biological son the villain, setting up a pseudo Cain and Abel scenario.

It is a plot device that serves to wrap up the quartet of films that have served Daniel Craig’s tenure as 007 as well as resurrecting an ancient adversary. Oberhauser describes himself as “the author of all your pain” and the loss of Vesper Lynd and M, whose deaths in the previous films weigh heavily on Bond’s psyche, is poignant and palpable.

The invention of Madeleine Swan as the daughter of Mr. White cements another retaining wall with the Daniel Craig era, as does Mr. White’s brief appearance.

The spectre of White, Vesper, M, Le Chifre and Silva permeate the first half of the narrative, tantalising an expectation of closure. A campaign to merge MI 6 and MI5, creating a super surveillance spook house and the consequent dismantling of the Double O section causes M, Moneypenny, Q and Tanner, to mobilise, getting them into the field, a utilisation that creates some of the best scenes in the film.

The first dud note comes with the scene in Rome where there is a perfunctory and nonsensical knee trembler between Bond and the widow of the man he killed in Mexico. From widow maker to widow lover, the chemistry in the biology is as sexy as formaldehyde, the whole encounter staged like a prescient necrophilia. A spectre of sex, perhaps. And a woeful waste of Monica Belucci.

Lea Seydoux as Madeleine Swann doesn’t fair well in the chemistry stakes either, introduced as a smart, capable woman, resisting Bond’s overtures, overturns her resistance in a blink of shared homicide and declares her undying love for him. It’s a swan song for any semblance of believability, the suspension of disbelief swayed topsy turvy.

A car chase through a mysteriously deserted Rome feels like the vehicles have been set at cruise control and a bit of biffo aboard a train strains under the wink wink nudge nudge homage to Goldfinger complete with ivory tux and detection by reflection of the assailant.

Goldfinger looms large in SPECTRE. There’s the use of an ejector seat, a vintage Rolls Royce used by the villain, and a henchman who evokes the mute brute Oddjob, who eschews a bowler hat for a gold varnished manicure, not to die for, but to kill by. Out vile jelly!

The SPECTRE lair in the Moroccan desert evokes the crater volcano from You Only Live Twice, complete with resident white cat. The welcoming committee to the hideaway is lifted straight out of Dr. No.

Despite its missteps, SPECTRE still delivers a stack of entertainment. Ralph Fiennes is particularly fine as M, Ben Whishaw ramps up the Q quotient, Naomi Harris nails Moneypenny and Roy Kinnear is terrific as Tanner.

Give this fabulous four the next film and give 007 a holiday.   Now there’s an idea.   Get me the producer Barbara Broccoli on the line.