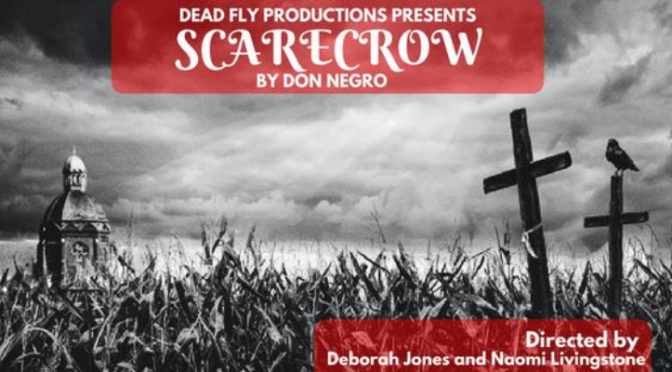 We meet Rose and her daughter Cally.  Never going out and probably feigning her illness, Rose has always had Cally to herself in the tiny house on the edge of a cornfield but the daughter is ripe for manipulation and sexual predation.  Enter Nick.  Shadowy and experienced in influencing pliable, inexperienced, naive young women, his agenda apparently reaches beyond just sex with the eager Cally, past the field’s scarecrow into the house itself.

The three characters never leave the stage and having no travel and entries gives a smoothness to the flow between the many short scenes.  When not specifically interacting, there are several monologues in the piece, the women are still and frozen in place.  Nick, however watches actively and whistles around the chewed on toothpick between his teeth.  Jones and Livingstone have used his threat and unpredictability extremely well and his Texas one step around the rocking chair towards the end of the piece is terrible and chilling.

There are several very well directed physical sequences, the women have a bickering fight around the space and the threat and psychological damage is well faceted.  There is an intimate scene which must necessarily begin on the floor, always fraught in this venue which has extremely poor sightlines.  The co-directors have discreetly solved the problem by having a single character rise quickly to allow us to see openness of passion on her face.  Also excellent is the choice to have the monologues spoken still and direct to the audience, relying on the considerable ability of the female cast.

Especially Romney Stanton as Rose, who is simply mesmerising.   Her work is yearning and plaintive with a particularly gripping rendering of the mysterious.  She is pinched and sharp with excellent technical command of diction as her character ramps up the manoeuvring of Cally.  In Stanton’s Rose we have a complex maternal mix of protection and self-interest.    She is as manipulative as Nick.

Blake Wells brings a Nick who lacks any mystery to the audience while maintaining a supernatural overbearing hold on Cally.  When he speaks to her of her mother’s pain and her grandmother’s money, there are knowing laughs and head shakes in the audience at Cally’s slow uptake of the intent.  Gemma Scoble’s Cally projects an innocence as required but where her work really shines is in the first person monologue which describes her actions and thinking as she circles her sleeping mother.  It’s creepy as hell and the tension is superbly evoked.  So much so, that there were nervous, stifled giggles in the audience.

Audio is used to good effect in this production. (Composer: Laura Heuston)  The clock ticks and chimes which add atmosphere to the in-between-scenes’ darkness are well sourced and recorded but as the finale draws close there is a very fine use of music to escalate the unidentified.  A perverted country air is only just distinguishable but with the text as it becomes more taut, the pitch rises as the fiddle becomes identifiable and the abstract disappears with an increased volume.  It’s very haunting.  As is the simplicity of design in the lighting (Alex Holver) which restricts itself to white light until a well-chosen and expressed blue and orange mix for the denouement.

SCARECROW [Facebook Event] is a tight 50 minute show which is perfectly suited to its venue, ominous in its intentions and sinister in its impact.    It continues as part of the Sydney Fringe until Saturday 29 September.