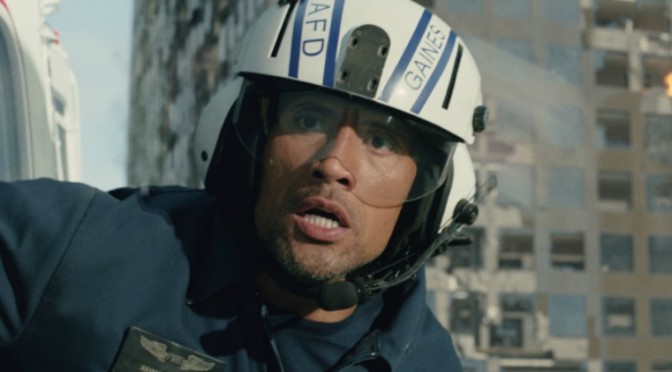 Disaster films are generally the same. Over the top, inaccurate, Americanised, cliché ridden and predictable. The Day After Tomorrow, Twister and Independence Day are just a few that come to mind. What are their attraction for movie goers? Is it the star studded cast? The amazing special effects? How one person can save the day?

SAN ANDREAS is the latest disaster flick to hit the silver screen and is already breaking box office records despite receiving a poor reception from critics. The movie dominated its competition over the opening weekend ranking in a whopping $US 53.2 million. It is grossing very well in Australia where parts of the film was shot at the Village Roadshow Studios in Gold Coast, Queensland.

SAN ANDREAS stars Dwayne ‘The Rock’ Johnson, the  film’s big drawcard, as veteran helicopter rescue pilot, Ray. In the film’s opening, we discover that Ray is being divorced by his wife Emma (Carla Gugino) as the result of losing their youngest daughter and second child to a boating accident. Their only other child, older daughter Blake (Alexandra Daddario), travels to San Francisco with Emma’s new boyfriend, the greedy billionaire property developer Daniel (Ioan Gruffudd).

The film also stars Paul Giamatti as Dr Lawrence Hayes, a seismologist who has predicted the arrivals of the earthquakes and tries to warn everyone.

Ray’s estranged family become caught up in the earthquake and amazingly Ray saves them as only ‘The Rock’ can.

The movie offers some of the most amazing action sequences, and visual effects and scenery shown on the big screen. However, don’t expect anything else great to come out of this film. Even Kylie Minogue’s brief role did little to improve a mediocre viewing experience.

SAN ANDREAS is in cinemas now. Movie goes will neither be shaken or stirred.