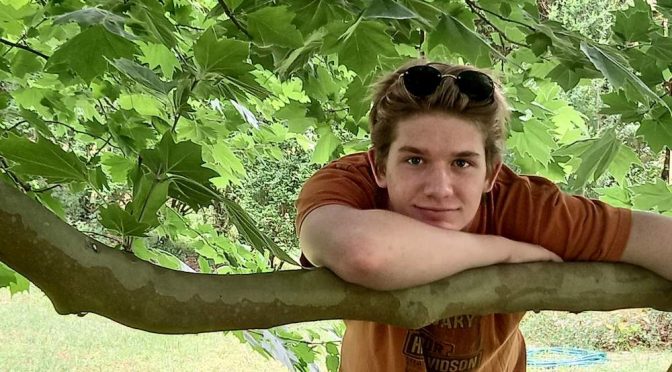 Samson was in New York early last year and by a series of circumstances found himself in a one-off class with Sheila Gray, one of NYC’s top theatre and film coaches. Sheila singled him out for special attention and he joined several of her classes with some of America’s top young actors. Upon returning to Australia, Samson began regular online classes with her including many with the cast of “Riverdale”.

Following this, Sheila invited Samson to join (without audition) a small, select group of America’s top young performers to take two weeks of classes with Tony Greco. Greco is something of a legend in America as he is the main proponent  today of the Lee Strasberg technique. Greco also was the principal coach of Phillip Seymour Hoffman who worked with Tony for all of his acting life. Samson was all set for the classes in August of this year, 2020.

Of course, everything changed with the onset of Covid-19. However, well-known local acting agent and director Les Solomon saw some of Samson’s work and invited him to be part of Zoom readings during lockdown. From this came a rehearsed online reading of then play: “The Credeaux Canvas” with Samson taking the leading role.

The great success of these readings evolved into a full, live season of the show – the first professional theatre production to open in Sydney after the initial lockdown. Credeaux ran for 11 weeks and 53 performances and garnered extraordinary rave reviews for the show and for Samson.

As a result of his success in the show, Samson was cast in a leading guest role in the Channel 7 TV series “RFDS” (Royal Flying Doctor Service), landed key roles in five commercials and has now been cast again by Solomon as one of the leads in “The Shape of Things”.

He says “It shows you that when one door closes another opens. What has happened to my career as a result of Covid has been very different from what I expected would happen in 2020. But the end result has been phenomenal”

Samson Alston can next be seen in the lead role in Lambert House Enterprises production. of Neil LaBute’s ‘The Shape Of Things’ at the Flight Path Theatre in Marrickville.

‘The Shape of Things’ a brilliant play by Neil LaBute has five week season at the Flight Path Theatre starting with previews on the 8th and 9th January and is playing Tuesdays to Saturdays at 7.30pm plus Saturday 2pm and Sunday 6pm up until January 31, 2021.

The Flight Path Theatre is located at 142 Addison Road, Marrickville.

One thought on “SAMSON ALSTON: A YOUNG ACTOR FINDING HIS WAY THROUGH COVID 19”