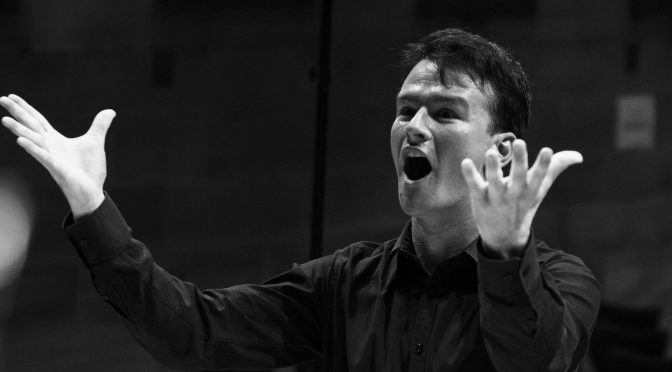 The Sydney Chamber Choir has has a new Music Director Sam Allchurch. This is after the recent passing of its long time and much loved Music Director Richard Gill. Sam is picking up the baton with his debut concert Saturday week, 30th March at the Great Hall, Sydney University. Music lovers are in for a treat. Mr Allchurch  shared his thoughts about the first program he has curated.

“Taking on the mantle of musical director of Sydney Chamber is a very exciting prospect for a choral conductor – something akin to be handed the keys to a Rolls-Royce!

To begin our time together, for my first concert as Music Director, I was keen to perform one of the great motets of JS Bach, Singet dem Herren ‘Sing to the Lord a new song’. This is a tour de force of virtuoso choir writing and one of my favourite pieces: joyful and ebullient in its outer movements and beautifully reflective in the slow middle movement. I was also drawn to Singet by the skill of the singers in Sydney Chamber Choir, one of the few ensembles in Australia who can tackle music of this complexity.

I designed a program of music which is about music. In some cases this is obvious – from the Italian Renaissance, Palestrina’s Kyrie from Missa ut re mi fa so la is based on the major scale and Elliott Gyger’s ut queant laxis picks up on the same idea.

In other cases, the link is more subtle – Joseph Twist’s How shall we sing the Lord’s song in a strange land? and William Byrd’s Quomodo cantabimus set singing as a means of consolation in difficult times – Twist in contemporary Australia and Byrd in 16th century England. Twist’s piece combines the Latin psalm text with poetry of Oodgeroo Noonuccal to make us think about the relationship between what we are singing and where we are singing it.

Sydney Chamber Choir has a strong history of performing Australian choral music  – and while I’m passionate about premiering new works with the Choir, I’m equally committed to second and third and fiftieth performances of existing works (such as the Twist and the Gyger) to build up awareness of this great repertoire.

In my first program as Musical Director, I wanted to recognise my predecessors who have built up the Choir to perform at the high standard audiences enjoy today. Nicholas Routley who founded the ensemble in 1975, is a great expert in the music of Josquin and his Renaissance contemporaries, and has recorded some of this music with the Choir. Amongst these recordings, I find Nicholas’ interpretation of Josquin’s motet, Nimphes des bois, very moving. The motet was composed as an elegy to mark the death of fellow composer Ockeghem. The text written by Jean Molinet names four other composers at its conclusion. In  the midst of Molinet’s text, Josquin threads the traditional plainchant for the dead, Requiem aeternam, dona eis Domine.

The  Choir’s second Musical Director, Paul Stanhope, is to my mind one of the most significant composers in Australia today and it is a great delight that so much of his music is written for choirs. Paul is also a friend and trusted adviser, and so I couldn’t imagine this concert without one of his pieces. I chose to include his Cherubic Hymn for choir and organ which was commissioned by the Choir of St James’ King Street in Sydney. The text comes from the ancient liturgy of St James and traces a journey from a hushed, almost terrified vision of God through to an exultant vision of the choirs of angels singing their praises.

It was Paul Stanhope who really introduced me to the music of contemporary Scottish composer James MacMillan, when I was attending some of his rehearsals with the Choir of that composer’s incredible Miserere. MacMillan has developed a style of choral music that resonates with contemporary audiences – it is fresh but harks back to ancient traditions, it has clear stylistic hallmarks (beautifully treated Scottish ‘snap’ rhythms) but each piece has something new to say. MacMillan’s A New Song, emerges out of nothing and builds to a blazing vision, concluding with a dramatic solo part for the organ.

The impact of Choir’s third Musical Director, the late Richard Gill, on music and singing in this country is hard to put into words. Richard’s incredible fire for music and for its role in all aspects of society nurtured generations of Australian musicians. Richard was a great mentor to me personally – over many early morning cups of coffee in the QVB (at the only café in Sydney which he believed didn’t play annoying recorded music), we would sit and discuss all things choral music.

Elliott Carter’s short madrigal Musicians wrestle everywhere is a nod to this great wrestling between Richard Gill and Australia to take music seriously. The piece alternates between the five vocal lines wrestling for prominence and moments of pure choral joy where the voices sing together in the same rhythm about the ‘new life’ that Elliott Carter believed music offers. This seems a good nod to someone who brought so much joy to musicians and audiences alike.

The other substantial work on the program is Benjamin Britten’s Rejoice in the Lamb, a great hymn to music itself. Britten sets words by the 18th century poet, Christopher Smart, which describe the praise of God in music, both by humans – and by a cat named Geoffrey, a valiant mouse and the flowers. Smart wrote this while in an asylum and the anguish of being incarcerated and abused because of his difference is included in the text itself:  ‘for the officers of the peace are at variance with me, and the watchman smites me with his staff’. Britten’s own sense of being an outsider when he wrote this work in 1943, as a homosexual pacifist, comes through (at least to me) very strongly in the music. And whilst this sense of isolation is quite specific to a past time, the combination of a great vision and a being excluded seems to remain an important one.

And finally, at both ends of the program, there are pieces about music and singing. Twentieth-century English composer, Herbert Howells wrote music for lots of different forces, from solo songs to large orchestral works. For me, however, Howells is at his best with a choir and an organ and his Hymn for St Cecilia is a perfect example of his talent for spinning a beautiful melody and crowning it with exactly the right harmony. St Cecilia is the patron saint of music and musicians and it so Howells’ piece fits in well. Michael Tippett’s Dance clarion air, is more harmonically adventurous but nonetheless a delight to sing.

MUSIC ON MUSI embodies the direction I am looking to go with Sydney Chamber Choir – to explore the very best of the choral repertoire, which is the largest and oldest body of Western art music, and to explore the connection between old and new music and what those connections say about our lives.”

Sam Allchurch’s debut concert as Music Director of Sydney Chamber Choir, Music on Music, is at the Great Hall, University of Sydney, at 7.30pm on Saturday March 30..