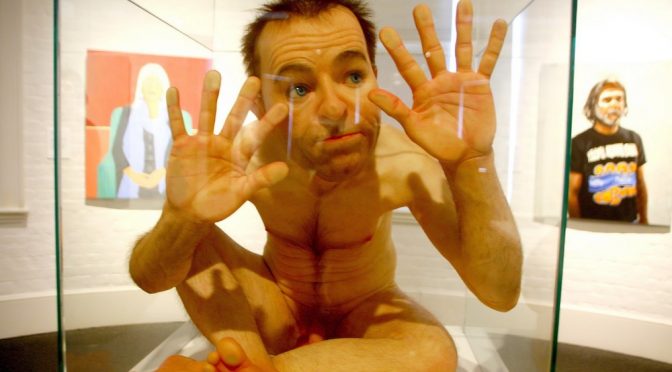 The Salon des Refusés was initiated by the S.H. Ervin Gallery in 1992 in response to the large number of works entered into the Archibald Prize which were not selected for display in the official exhibition. The Archibald Prize is one of Australia’s most high profile and respected awards which attracts hundreds of entries each year and the S.H. Ervin Gallery’s ‘alternative’ selection has become a much anticipated feature of the Sydney art scene.

Each year the S,H. Ervin Gallery panel is invited to go behind the scenes of the judging process for the annual Archibald Prize for portraiture and Wynne Prize for landscape painting and figure sculpture at the Art Gallery of New South Wales, to select an exhibition from the many hundreds of works entered in both prizes but not chosen for the official award exhibition.

Also on show at the S.H.Irvin Gallery, hung in the cafe, were some paintings from the Young Archie entries that didn’t make the final ‘cut’ at the Art Gallery Of New South Wales.

Ben Apfelbaum was on hand to take some photos of this alternative exhibition. Here are his photos of some favourite works.

The History of the Salon Des Refuses

The term Salon des Refusés comes from a group of French artists of the 1860s who held several breakaway exhibitions from the traditional Salon overseen by the Academy.

In 1863, the French Academy rejected a staggering 2800 canvases submitted for the annual Salon exhibition. Among those refused were Paul Cézanne, Camille Pissarro, Henri Fantin-Latour, James Whistler and Édouard Manet, who entered his now legendary painting, Le déjeuner sur l’Herbe. This particular work was regarded as a scandalous affront to taste.

The jury also argued these artists were “a clear danger to society and that the slightest encouragement would be risky.” Since there were very few independent art exhibitions in imperial France, the taste of the buying public was dictated almost entirely by the Academy.

Most members of the public invested only in artists sanctioned by the Salon. Rejection by the Academy therefore threatened many artists with professional extinction. The protests that followed the Academy’s 1863 decision were so public and so pointed that eventually Napoleon III himself appeared at the Palais de l’Industrie and demanded to see the rejected works. He then instructed the Academy to reconsider its selection and when it refused, the Emperor decreed that the rejected paintings go on display in a separate exhibition. And so the phrase Salon des Refusés entered into the world’s artistic lexicon.

The S.H.Ervin Gallery has an in-house lovely, quaint cafe that is open daily.