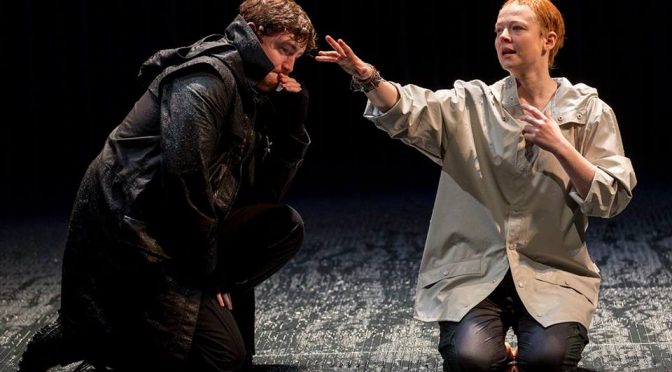 Joan stands still and watches as the men in front of her discuss her.  Though unmoving, the lights glare off Joan’s armour and we know she sees them, these men who construct their plot and lay plans against her.  Seldom will she have complete autonomy here, seldom can she act on her own without convincing some man to give her what is required and, finally, these men will encircle and end her.  This is a SAINT JOAN for a modern audience.  Directed by Imara Savage with text from Shaw and Savage and Emme Hoy and an implosive performance from Sarah Snook, this St Joan is understandable, relevant and, whatever your belief system, driven by forces invisible.

Joan’s voices are carried on the bells and when Snook puts her hands over her ears, she enters the rapture where the bells speak only to her.  It is just one of the modern reinterpretations of text that make this production so dense and enjoyable.  Allied with a contemplative investigation of a person compelled to act is an interrogation of female power in an age before our own.  Joan has survivalist impulses to stillness, she speaks frequently from sitting and with absolute conviction impels the powered around her to do as she asks.  Snook ages her Joan from rude country girl to impassioned advocate for nationalism and spirituality with a robustness that neither feminises nor butches up the Maid.

It’s a marvellous creation in a wonderfully imagined production.  The encircling of Joan begins early when the vertical line folds of the dark grey curtain half-circle which constitutes the set are only slightly more flexible than the attitudes around her.  When the light shines silver and white on Joan taken by spirit as the men share her stage in a connivance of traditional flesh and amber lighting, she is separate and apart in her resolutions.

When the men appear huge as they divest Snook of the shining armour, she is small and in the hands of giants. When Joan speaks as flesh and blood girl and woman, her rustic hues a visual counterpoint to the male characters clad exclusively in black.  Those in double breasted long coats delineating characters with the subtle specificity of an ecclesiastical collar or a bishop’s cross.  We hear the bells but they do not speak to us, yet Joan will interpret with a resound of echo and atmosphere setting audio will grumble discontentedly beneath battles unseen. (Set Designer: David Fleischer; Costume Designer: Renee Mulder; Lighting Designer: Nick Schlieper; Composer and Sound Designer: Max Lyandvert)

Yet the men are not evil.  There are those on her side, there are those appalled by a perception of perversion in Joan’s appropriation of scriptural entities and there are those who owe their power to her intercedence.  John Gaden is towering in his roles and when, as Archbishop, his voice softens and venom drips one fears greatly for Joan.  Similarly, one watches with relief as Brandon McClelland’s General appears convinced by her simplicity and faith.  It’s a tough watch in places but Savage has discretely insinuated contemporary comic condemnation at some of the absurdities of the politics  to relieve the unremitting tension.  And, beautifully exposed, lighter moments of Gareth Davies’ track suit wearing Dauphin are carefully placed within the tight 75 minute production.

There is no doubt that a purist, myself perhaps, will attend ST JOAN with expectations of the original text.  I was waiting for the humility inherent in Joan’s explanation of her capture by the Burgundians and I did so miss the comedy of the day-leave solder of the epilogue.  But joy outweighs sorrow in the viewing when one is watching such an extraordinary performance inside a rigorously created production.  SAINT JOAN reaches from 1431 via 1923 to our current circumstances with an exhortation to be inspiring. 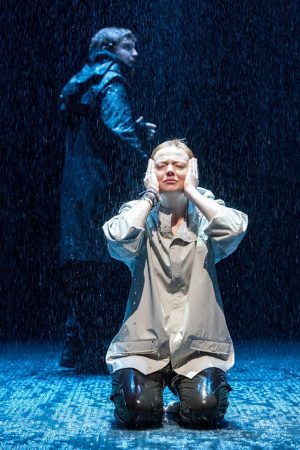