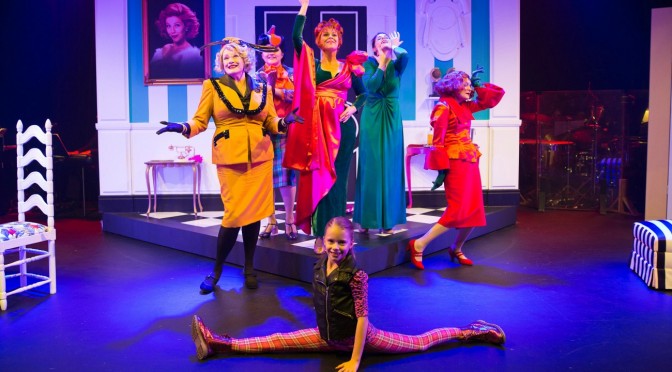 New initiative, The Theatre Division, triumphs with its current production, RUTHLESS! THE MUSICAL. This cuttingly satirical piece takes a decent back-stab at many aspects of the musical theatre industry, middle-American home and school life as well as the entertainment media.

Lisa Freshwater’s direction of a stellar cast ensures the piece progresses at a cracking pace. Amidst the mayhem of masked identities, merciless ambition from all ages and mother-daughter dialogues, some snippets of genuine confusion or heartbreak also appear. Issues burst forth from the Sydney stage in the firm hands, feet and voices of this premiere season cast. The strong tradition of this US cult musical is upheld.

References to the musical theatre canon here range from the slight to the sarcastic, however they never emerge as cliché moments nor do they fall flat. There are likewise no flat moments in the musical presentation. Musical director Brad Miller leads a band of two pianos, bass and percussion to generate cycles of familiar Broadway-styled music, sound effects and firm accompaniment to some firmly executed song and dance numbers.

Katrina Retallick’s hilarious version of ‘Tina’s Mother’, choreographed around the dial phone is a great opening. She is instantly engaging and focussed shining with something of a pop art luminescence against Mason Browne’s retro living room set. At this performance, dynamo Madison Russo makes quite an entrance as tiny talented tapping and singing Tina Denmark. Her performance continually shows good comic timing and an ability to deliver surprising and deadpan material.

Margi de Ferranti brings her voice and experience to create her dual roles. Firstly as school teacher and theatrical failure Miss Block, we witness a landmark interpretation of “Teaching Grade Three”. She then morphs into an amazingly costumed caricature of the theatre press, Ms Myrna Thorn. There is subtle comedy of all shades and degrees within these characters.

Following the energy of Tina Denmark’s ‘Born to Entertain’, the bar is raised with Geraldine Turner’s entrance later as the grandmother and Broadway critic. ‘I Hate Musicals’, a classic Broadway showstopper which wittily jabs at the industry and well-known shows, is expertly delivered. It reminds us why Turner remains a proven star of the Australian entertainment industry. She also enters swathed in and topped with one of the most exciting outfits and pieces of millinery in the well costumed show.

Meredith O’Reilly initially enters as sinewy Sylvia St Croix. She is a mysterious and driven talent coach and tags along as a significant ‘mother’ of the gifted but dangerous Tina. Her humour and moments of exposition help gel many moments together. The same can be said of Caitlin Berry, whose switching between no less than three characters fleshes out the cast as well as providing well-paced forward direction. Her crafting of the obsessive and ambitious Eve, personal assistant to an award winning theatre star, is screaming on top note for a straitjacket.

Set design works well with use of a revolving structure. For the contrasting world in Act Two, the elegant set detail adds to the excellent wig and costume choices to show the women in changed status. Katrina Retallick’s transformation from housewife to star is a visual feast, enhancing melodramatic performances such as ‘It Will Never Be That Way Again”. Just when you think situations in this show cannot get any more outrageous, along comes the denoument. All is swiftly and hysterically dealt with by this great Australian cast.

This premiere season continues until July 5. If you work in the theatre industry, this modern classic is essential viewing. If you simply crave quality production values and fine entertainment, you will love this show at the Seymour Centre. Everyone in this ensemble effort is worthy to play what the characters refer to in hushed tones as ‘…the lead!’.

For more about Ruthless!, visit http://www.seymourcentre.com