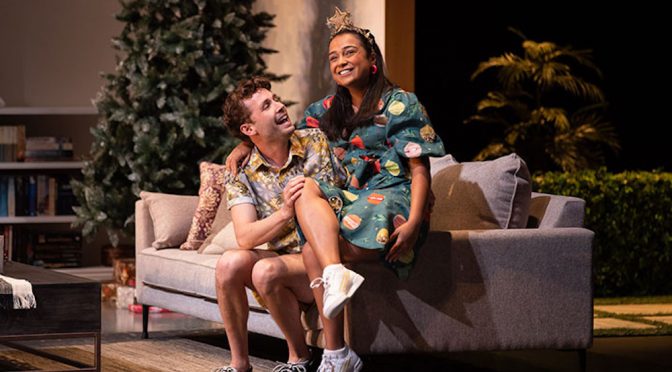 The Sydney Theatre Company has made a welcome return to the Drama Theatre after a long absence due to Covid 19 with young British playwright Sam Holcroft’s play ‘Rules for Living’. That it was a frenetic comedy was even better. After the darkness we have all been through, it’s great to have a comedy to enjoy.

It isn’t long into the play that one learns that Holcroft’s play isn’t the kind of play that you can just sit back and enjoy without being too attentive. ‘Rules for Living’ is cerebral, multi-layered entertainment and one has to be on the ball.

As one would expect, the Christmas lunch goes awry. There is rivalry between the two brothers and conflict comes out within the relationships of the two couples. The mother is busy racing around. The father is a wheelchair-bound stroke victim who has a predilection for groping young women.

There is an added layer to the show. The audience receives cues as to how characters will behave through rules/instructions that are transcribed onto screens placed above the stage.

The show is well set up in the first half and Act 2 sees it really fire as it races along to high farce and then a surprising climax.

Susanna Dowling’s direction is clear and concise. Her ensemble cast is excellent. My favourite performances are by Nikita Waldron as the vivacious Carrie and Hazem Shammas as the stirrer Adam.

Well worth a visit, the Sydney Theatre Company’s production of ‘Rules for Living’ is playing the Drama Theatre, Sydney Opera House until Saturday 19th December, 2020.