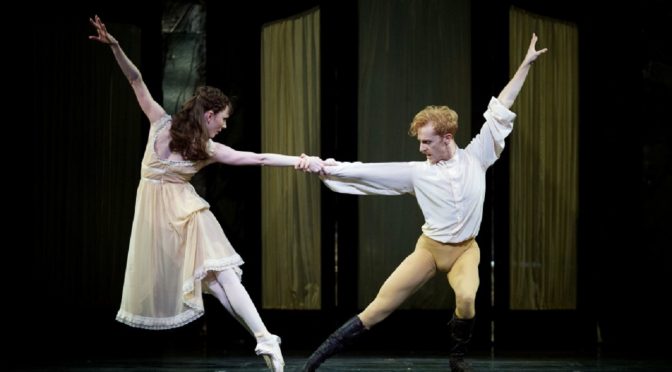 There are not many major ballet works that feature drug use, skulls and guns, especially to such a degree. And opera is also included in the party scene in Act 2. The staging is labyrinthine, the set designs looming and opulently lavish, the costumes incredibly detailed.  Under the baton of Koen Kessels the ROH Orchestra is in glowing, passionate form. Lizst’s music swirls, ebbs and crashes towards the tumultuous tragic end.

It is the narrative that drives the work and there are many pas de deux through the piece highlighting Rudolf’s relationships with the various women in his life, (which can get quite confusing actually with his many ex mistresses) with choreography that challenges classical ballet to its limits. We see Rudolf seeking love from his cold mother Empress Elisabeth (Kristen McNally) in one very intense pas de deux for example. As well, there is the terrifying wedding night pas de deux for Rudolf and his new wife Princess Stephanie where he threatens her with a skull and a gun. Hinkis as Princess Stephanie dances ravishingly and is exquisite.

The ballet is regarded as one of the most demanding in the repertoire, especially for the premier danseur performing Rudolf. It is an incredibly demanding physically and emotionally role as we see Rudolf spiral into emotional instability .He is forced into an arranged political, loveless marriage with Princess Stephanie ( Meaghan Grace Hinkis). When Rudolf meets the young Baroness Mary Vetsera he becomes obsessed and the two end up committing joint suicide.

Steven McRae as Rudolf is magnificent, dealing with the demanding choreography effortlessly and displaying clean, precise technique in his tours and jumps.  Also he demonstrates his skills as an   actor as we see him descend into despair and madness. We come to view Rudolf sympathetically . The pas de deux with Mary Vetsera are intense and magnetic. One of the hypnotic main pas de deux for them is savagely capricious and wild.

Sarah Lamb as the young ,rather unsophisticated Mary Vetsera who is obsessed with death like Rudolf was astonishing with adroit yet salient grace and revelling in the almost impossible to perform sinuous and dramatic pas de deux.

The entire ensemble portraying all the various characters were in most impressive form , the packed court and crowd scenes displaying the company at its scintillating best .

The brothel/tavern scene in Act 2 was disturbing and with the prostitutes the costumes and atmosphere hinted at the development of Weimar cabaret.

An extraordinarily powerful and riveting performance of this darkly disturbing work .

Running time allow 3 and ½ hours including two intervals , a short introductory ‘the reviving of ‘ and interviews during the interval.