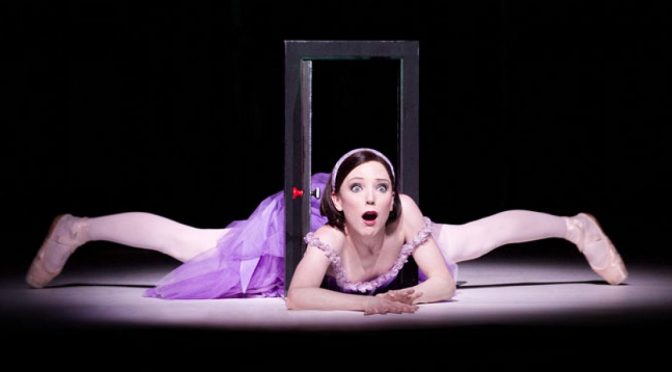 There are perhaps hints and allusions to the ‘big three’ of the Tchaikovsky /Petipa/Ivanov works in certain parts of Wheeldon’s choreography, particularly in some of the pas de deux for Alice and Jack/the Knave of Hearts and the Queen of Hearts spoof of the Rose Adagio. Joby Talbot’s sparkling, remarkable score is full of glissando mood swings and nifty character definition. The Orchestra under the baton of Koen Kessels was excellent.

The ballet opens introducing all the cast at a garden party where Alice’s mother dismisses the under-gardener, Jack (Federico Bonnelli) for stealing a jam tart. This leads to heartbroken tears from young Alice (Lauren Cuthbertson) – presented as older than in the book – who was rather hoping to see him later for a tryst. Very handsome Bonnelli dances wonderfully as the Knave of Hearts/Jack. Alice’s home is also visited by the ‘real’ Carroll (that is, Charles Dodgson) and by characters who will later reappear in Wonderland.

The dangerous sausage-making scene in the lethal Cook’s ( Kristen McNally ) kitchen could have come out of Sweeney Todd, and the axe-wielding psychotic madness of the Queen of Hearts ( Laura Morera) creates a real sense of frenzied terror. The ballet, at times, immerses itself entirely in the rather surreal Carroll universe, following the dreamlike narrative and its nonsense-cum-logical progression with remarkable fidelity. Morera as the tyrannical, malignant scene stealing Queen of Hearts was brilliant and there was a somewhat angular pastiche of the Rose Adagio from Sleeping Beauty with her four ‘suitors’ perhaps in the style of Les Ballets Trocadero. The gentle, lugubrious old King of Hearts ( Christopher Saunders) was perhaps brother to the red king in de Valois’ ‘ Checkmate’ .The horrid Duchess as portrayed by Gary Avis could possibly have stepped out of Victorian pantomime.

I thought James Hay as the dithering , scared courtier of the White Rabbitt/Lewis Carroll was excellent and extremely stylish in his elegant white satin, looking quite like Elton John in those ( rose tinted? ) glasses. He has incredible, soft bouncy pas de chats at one point, beautifully performed and it is pleasing to see how he helps Alice and the Knave hide from the Queen.
As the exuberant Mad Hatter with his dynamic, colourful tap shoes and dazzling style, Steven MCrae was superb. He has an exuberant, showy duet with Alice.The strange tea party with the March Hare ( Paul Kay) was excellently performed with the poor dormouse (Romany Pajdak) ending up in a giant cup .
Act two’s waltz of the flowers in the garden is a delightful homage to the traditional Petipa story ballets. Special mention must also be made of the enchanting (dis)appearances of the impish, playful Cheshire Cat brilliantly conceived. A later segment is a tribute to the angular precision of modern dance, with the corps de ballet as a deck of cards (think sort of perhaps Stanton Welch’s Divergence).
The sinuous sensuality of The Caterpillar (Fernando Montano) and his slave girls was a delightful piece of exotic kitsch with allusions to The Nutcracker. And I loved the blue pointe shoes, especially encrusted with diamonds!

And I mustn’t forget the fish and frog footmen (Tristan Dyer and David Yudes ) fabulously costumed or the wonderful flamingos and hedgehogs of the croquet game.
Towards the end there is an extremely polished and beautiful pas de deux between Alice (Lauren Cuthbertson ) and the Knave of Hearts (Federico Bonnelli) . And I loved the return, at the end, to the real ‘ world of current, contemporary Oxford.

A wonderful, spectacular revival. The Australian Ballet have just opened in Sydney with their production at the Capitol .

Running time – allow 3 & ½ hours including two intervals.The film also includes a short documentary beforehand on the revival of the work, and there are interviews various people associated with the production during both intervals.
The Royal Ballet’s ALICE IN WONDERLAND screens at selected Event cinemas 25 – 29 November 2017 as part of the Royal Opera House 2017/18 Live Cinema Season.