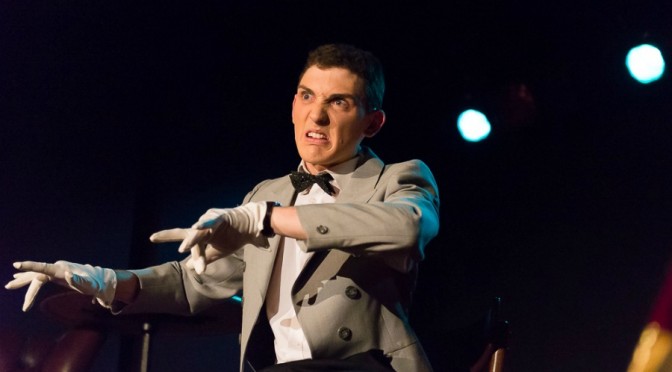 On Tuesday night, I took a screechingly funny trip down memory lane. Gabriel McCarthy’s Rowan Atkinson Tribute Show (RATS) was lots of fun, even though I had seen all the material before! The show comprised a collection of about 14 sketches showcasing the superb talents of both McCarthy (as Atkinson) and Valentino Arico as his straight man – an essential character in many of the routines.

Both actors demonstrated strong comic timing, and as the sketches are so cleverly written, they all worked very well!

It is a very courageous actor who takes on a tribute to Rowan Atkinson, the master of the elastic face and body, with consummate skills in pratfall – and, most of the time, McCarthy did not disappoint.

The two strongest pieces were McCarthy playing the invisible piano and the invisible drum kit. He REALLY worked those instruments, and his facial contortions communicated the character’s delight in the activity. I was a little puzzled by the many trips to the sound desk beyond the audience. Was there a genuine problem with the sound, or was this part of the routine? Either way, I found this breaking of the fourth wall jarring; disturbances to an otherwise pleasing performance.

The hilarious high school roll call sketch was also particularly enjoyable; some younger audience members, who probably hadn’t seen this before, were in hysterics! McCarthy included some topical references in some sketches which worked well, and he also responded cleverly to vocal audience members.

The stage at The Vanguard is very small, but did not present a problem for this very physical performer! McCarthy threw himself all over the available space, without missing a beat! This was quite an achievement!

McCarthy, though an Australian actor, has, like Atkinson, an accent reminiscent of the BBC, while Arico has an Aussie twang. This discord doesn’t usually bother me, but it did last night. Was it a deal breaker? Absolutely not!

RATS was a one night only event at The Vanguard, Newtown but if you are able to catch this show at another time, you should definitely see it! Lots of fun!