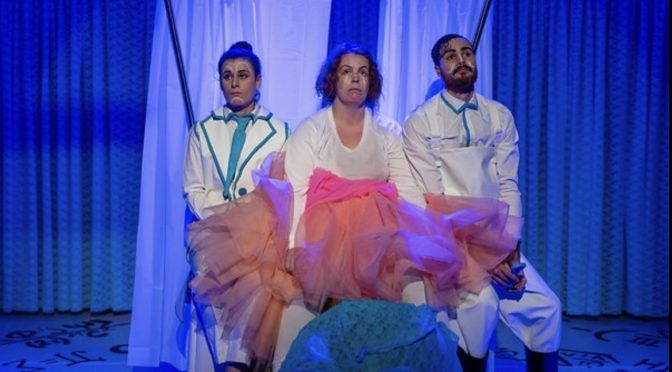 When exiting the theatre, as you step over the detritic chaos created by the human and robot cast of ROOMBA NATION, don’t let your program fall from your hand.  Or, to start at the beginning, buy a program you mingy sod!  Hurrah Hurrah’s program has lots of interesting information and, as this production will go from battery strength to mains power (see what I did there) that tiny, weeny sized print on A4  may well become a collector’s item.  Reading it at your leisure, amongst the bio and blurb you will find a little bit that describes what you are about to see as the “first iteration”.  And so it is.  It’s just not quiiiite there yet but all the basics are in play.  The shape, the themes, the length, the performances and …  the physical comedy.

Clowning is a messy business, that’s for damn sure and it is such a nice floor when you arrive.  Drawn on it is lots of Fibonacci-ish, golden ratio, spiral, theorum, um … ah… stuff.  All in lovely black swirling script on the nice white floor.  Then the doctor enters and she’s in really well cut and created first night whites.  Blinding.  The Nurse also, though his whites have a swish of angler’s waders about them. She is bent on proving that her cure works, even though it currently doesn’t and he is being superseded by an array of… sigh … care bots.  No wonder he is so cranky when a cracky new victim, sorry patient, arrives to be cured.  Of what?  Who the hell knows but we can kinder guess.

That’s because we just fell in love with Pippie, our kinder selves just kicked in as this lost little creature wandered in in her hospital gown clutching her sack.  There’s a sad sack clown joke in there that I just can’t formulate! For this is where my engagement with ROOMBA NATION started, and why I feel this show will be such a success. Human empathy, its physicalisation in these first moments of watching and its remonstrance against the technology that will take Nursie’s job is the humming heart of this production.

Personified by pimped up Roomba vacuum cleaners, the technology in the show is slow … too slow.  It will be great fun when it catches up with the concept which was extracted from the distorted reaches of Alison Bennett’s brain but at the moment it slows the humans down.  Mind you they do do a little dance and their blue lights are very perky in Treatment Sequence Number Three as they are subjecting poor Pippie to another ludicrosity.

Throughout it all, Pippie, played by Bennett, never loses her humanity, her charm and warmth or her wide-eyed quest for a cure.  This is despite the appalling behaviour of Kate Walder’s Doc.  Always with an eye to the chance of her studies being accepted by the establishment, Walder gives her character a rapaciousness that brings her close to the automatons that she upgrades constantly. Uselessly.  Except when she busts a move in the extremes of possibility.  It’s hard to explain, you’ll see what I mean.  Nursie is not above behaving with the coldness of electronica either.  As played by Nick O’Regan, he is very mean to our darling Pippie, but as the tortures, I mean treatments, continue he suspects something fishy about the whole thing and O’Regan grows Nursie  nicely into the humanity of the fin-ish.

But in getting there, these three create a lot of mess.  Much more than a Roomba can handle! But neatly packaged in an enjoyable, artful bundle with good lighting choices by Alex Torney, terrific music (loved the plucked strings and chimes) by Tegan Nicholls, really slick, schmick production design by Duncan Maurice and robot tech from David Kirkpatrick.   All of which work together beautifully with the skilled performers who spin comedy gold out of spinning robots to make an entertainment that has not yet reached peak charge but is well worth seeing.  And buying a keepsake program. 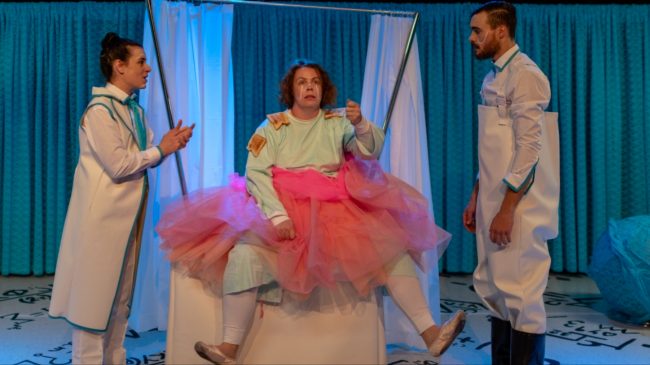