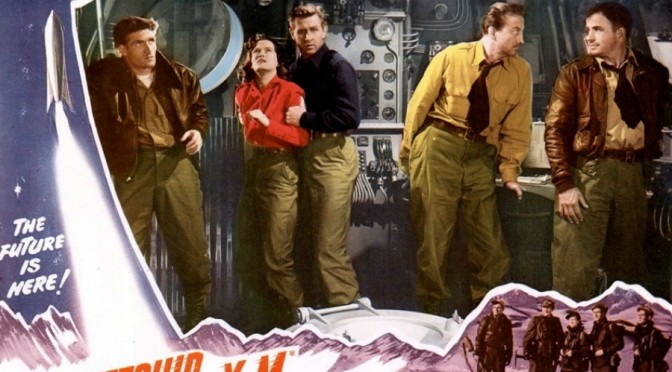 A long time ago in a decade far, far away, animator George Pal announced to the world he was making a movie that was meant to usher in a new age of science fiction films: Destination Moon (1950). It did just that, but not exactly in the way George hoped.

You take risks when you promote the making of a movie, namely that some bargain-basement independent filmmaker is going to squeeze out a low-rent rip-off and get it into cinemas while your project is still in post-production. Usually the culprit is Roger Corman but, amazingly, in this instance it was Robert Lippert who beat George by more than a month with the subject of this week’s discussion, Rocketship X-M (1950), which I suspect stands for Extra Medium.

Right off the bat I must point out how rare and charming it is to find a movie with such strong basic messages: Nuclear war is bad for you, and women are for making babies. The plot is formulated to hit upon these two points again and again. Truth be told, almost everything about this movie is annoying: The casual sexism, the army surplus wardrobe, the guy from Texas whose only qualification seems to be he’s from Texas and, of course, the flawed science.

The fifties did spit out sillier things, but not by much. Doctor Lisa Van Horn (Osa Massen) is merely a plot device for the male characters to blurt out sexist remarks during the entire length of the film, right from the opening dialogue. This dooms them all by repeatedly ignoring her fuel calculations but, hey, that was the early fifties. She was there simply to fill a sweater, not to be a useful member of the crew.

The annoying Texan from Texas is played by Noah Beery Junior, who appeared in annoying nice-guy roles much like his uncle Wallace Beery and his lesser-known dad, Noah Beery Senior. Junior was perhaps best known for playing James Garner’s dad Joseph ‘Rocky’ Rockford in the seventies television series The Rockford Files.

I have no doubt that Project Director Ralph will look familiar to my regular readers. Morris Ankrum was the guy you got when you wanted a Colonel or a General during the fifties. He saved the Earth from Flying Saucers in 1956, The Giant Claw (1957), Invaders From Mars (1953) and giant grasshoppers in The Beginning Of The End (1957) and, in Red Planet Mars (1951), he played the Secretary Of Defence who helps Peter Graves find God (who turns out to be a pro-Communist ex-Nazi living in South America – but that’s another story for another time).

Hugh O’Brian found fame in 1955 as the legendary lawman Wyatt Earp. Together with Gunsmoke and Cheyenne, the three shows were responsible for bringing forth the nullifying plague known as the Television Western. Despite its emphasis on character development instead of sermonising, it became one of the highest-rating shows ever.

During the seventies he co-starred in a television series called Search alongside Doug McClure and Tony Franciosa. The three actors would take turns appearing in episodes as high-tech private eyes. Well, high-tech for 1972, meaning chunky miniature cameras, surgically implanted radios and lots of beige.

The most familiar face aboard Rocketship X-M is the one attached to the front of Lloyd Bridges’ head, seen in more than 150 films, famous for starring in such television shows as Sea Hunt and Joe Forrester, and for producing hot Hollywood properties like Beau Bridges and Jeff Bridges.

Star Trek producer Gene Roddenberry, who worked with Bridges on Sea Hunt, first offered him the role of Captain Kirk, but he declined, holding out for something bigger and better than the USS Enterprise. Nothing materialised until a decade later when he accepted command of the Battlestar Pegasus. Late in his career he re-invented himself as a comedy actor, along with other post-prime performers such as Leslie Nielsen and Robert Stack, in a series of parodies featuring exclamation marks like Airplane! (1980) Airplane II The Sequel! (1982) Hot Shots! (1991) Hots Shots Part Deux! (1993) and Jane Austen’s Mafia! (1998).

With such a disposable…I mean dependable cast, the acting isn’t too bad, considering the challenging dialogue – a challenge not to laugh out loud, that is. They were going to the moon, but they miss and land on Mars instead, but that’s okay, they brought along hiking gear and rifles just in case there was any good huntin’ up there.

Actually, they were lucky to land at all, since the guidance system consists of someone looking out the window telling the pilot to tweak the throttle every now and then. The gravity changes directions every time they go through the hatch, and the astronauts give a press conference exactly twelve minutes before launch, which is why Doctor Eckstrom is still wearing his coat and tie during the launch.

These and other bizarre notions may make your modern mind reel, but the story is worth it. Will they have enough fuel to get back? Will Lloyd Bridges’ charmingly outdated misogyny break down the female’s icy and totally understandable disinterest in the rocketship in his pants? These and other questions will remain unanswered if you don’t watch the film! But Rocketship X-M isn’t all bad, in fact I believe it should be viewed by any serious movie buff.

Unfortunately, almost everything good about Rocketship X-M happens in the last twenty minutes, but I hope you don’t find the first hour too tedious though, because I look forward to enjoying your company seven days from now, to continue our eternal quest to find the second-worst film in the entire universe for…the Sydney Arts Guide! Toodles!

The Schlocky Horror Picture Show is screened every Friday night at 10.30pm on TVS Sydney Channel 44 streamed LIVE at http://www.tvs.org.au/programs/schlocky-horror-picture-show – be seeing you!