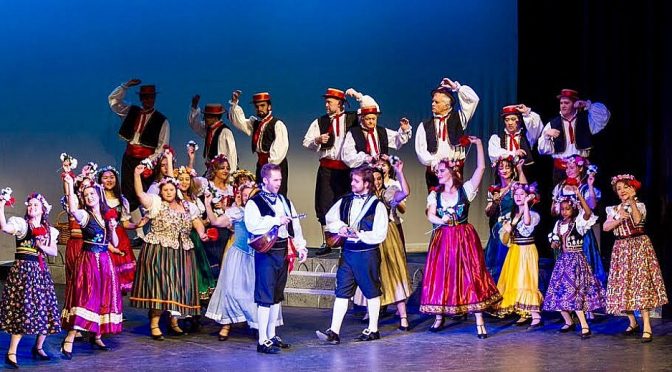 For a lighthearted night at the theatre Rockdale Opera Company’s THE GONDOLIERS is just the thing. It is one of the most popular of Gilbert and Sullivan’s operettas with the witty words and twisting plot of Gilbert combined with the cheerful and lyrical music of Sullivan.

A strong cast of principles, under the direction of Ralph Bott, have a great rapport bringing the tale to life. Spencer Darby as Marco Palmieri, Michael Kallidis as Giuseppe Palmieri, together with Amy Balales as Gianetta and Charlotte Campbell as Tessa form the central four lovers whose fate is suddenly upturned with some new arrivals from Spain.

The Duke of Plaza-Toro, played in a highly comic style by Gordon Costello and his majestic wife the Duchess, Megan Chalmers, along with their dutiful daughter Casilda, Jessica Harper and attendant come secret lover Luiz played by Daine Ellicott arrive.

Rory Struthers plays the rather evil Grand Inquisitor Don Alhambra del Bolero and Rhonda Walczak appears late in the operetta as Inez, the King’s foster-mother. The plot progresses through the two acts with revelations about mix ups between babies, secret marriages and unknown filial relationships.

The orchestra led by conductor and musical director Joh Smith, supports the ensemble who lend colour and atmosphere with their dancing and high jinx.

The wonderful array of peasant gowns, gondolier uniforms and lavish courtroom costumes help to locate the different scenes from Venice to the court of Barataria, aided by simple but effective sets including, of course, a gondola.

In true Gilbert and Sullivan style this operetta uses the stage for political commentary and to poke fun at the class system and the monarchy. Listen closely for the insertion of a topical reference.

After a delightful romp through the story all is happily resolved at the end and love triumphs.

Rockdale Opera Company’s production of Gilbert and Sullivan’s THE GONDOLIERS OR THE KING OF BARATARIA, well directed by Ralph Bott, is playing Rockdale Town Hall this coming weekend with performances this Saturday night July 1 at 7.30 pm and the matinee on Sunday afternoon July 2 at  2 pm.