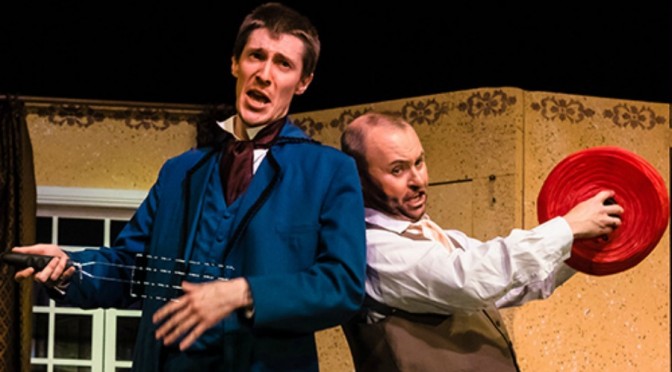 If you are in the mood to enjoy two well performed entertaining light opera works backed by a very pleasing orchestra make your way this coming weekend to the Rockdale Town Hall to enjoy the Rockdale Opera Company’s current double bill, both directed and conducted  by Jon Smith.

I went to the Sunday matinee and a  good  crowd was in to see the performance. The afternoon began with a rarely performed piece, COX AND BOX by Burnard and Sullivan. This piece is a bit of comic nonsense/ mayhem. A greedy landlord, Mrs Bouncer, rents out a room to two different people, a Mr Cox and a Mr Box, neither of whom knows the other. How does she do it? Well….Cox works all day as a hatter and Box works all night as a printer. So they never need the room at the same time. All Mrs Bouncer has to do is to constantly rearrange the room for the next shift. All is good until the inevitable happens and Cox comes home early one day, given a day off by his employer, and finds Box in his room. No amount of fudging by Mrs Bouncer can deny the facts.

The piece features plenty of comic exchanges between the three very different characters. There’s lots of song and some fun dance. Add to the equation a happy ending.

There was then a very pleasant longish interval where many patrons enjoyed a nice cup of tea or coffee and some sweets. In the vestibule area I sat next to a lovely Greek family- all three generations- enjoying a Sunday afternoon at the theatre. Particularly enjoying the afternoon was the bubbly  granddaughter getting in the spirit of things, smiling broadly and dancing around the room. Already a lover of music theatre!

We all took our seats again and Gilbert and Sullivan’s comic romp, one Act opera TRIAL BY JURY started with the large jury of men and women bounding through the theatre entrance, full of bluster, onto the stage.

They are in court to hear the case of a jilted woman  taking her ex boyfriend to court and seeking compensation for him not going through with the marriage. The ex gets to tell his side of the story to the jury who make it very known to him that they do not approve of what they see as his scandalous behaviour. Especially when he lets it be known that he didn’t go through with the marriage because he was bored by her and he has since found a new girlfriend.

Then the young lady gives full-blown version and everyone, the jury, the judge, the courtroom staff are full of sympathy for her situation.

The courtroom saga grows ever more ridiculous and is played out in a fun, good natured way by the cast. There’s lots of hand-gesturing by the Judge, the plaintiff does a jilted swoon act…the Jury are loud and boisterous…The courtroom scribe gets carried away with trying to transcribe the drama and ends up with quills in both his hands which he then gets totally confused by.

It’s all very over the top. Even the percussionist in the orchestra, Brendan Paul, gets into the mood, hitting the cymbals in an unscheduled moment, tying in with some fun action happening on stage.

The cast took a very well deserved curtain call. The leads were all good- John Morrison as the Learned Judge, Samanta Lestavel as Angelina, the plaintiff, Mitch Bryson as Edwin, the defendant, Megan Chalmers as the Counsel for the Plaintiff, Glen Stelzer as the Usher and Jon Tse as the Foreman of the Jury. They were ably accompanied by the supporting cast.

With the orchestra gently providing closing music, patrons then made their way into the foyer area for the raffle draw, a perennial event in community  theatres everywhere.

This  was a very pleasant way to spend  a Sunday afternoon.

There is one more weekend of performances- this coming Saturday 6th June at 7.30pm and this Sunday at 2pm. For more information visit the Company’s official site- http://www.rockdaleopera.com.au.