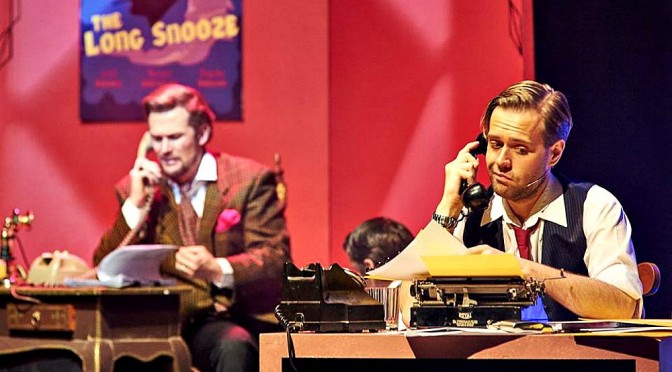 Dark and gritty, this is a rarely seen musical and Rockdale Musical Society give it a terrific production.

This show is about the LA movie industry and also is a homage to 1940’s film noir – think classic Humphrey Bogart. Two stories are interwoven.

In our “real” world, bashing away on a typewriter, a hack writer named Stine is adapting his detective novel City of Angels for the cinema, at the insistence of producer Buddy Fidler.

In the “reel” world, Stine’s characters – particularly his doppeldanger, Stone – are embroiled in a dark mystery involving a rich, decaying man with an iron lung, his grasping younger wife and the pair’s missing daughter/step-daughter.

Towards the beginning of the piece, Stine’s characters undergo sudden, rather comical repeated rewinds as he rewrites but they gradually find a life of their own while Stine’s sense of self collapses. It could have been a little confusing especially as there is doubling up with some of the actors however this production is clear in this respect.

Directed by Christie Wykes, and with its infectious jazz-influenced score (by Cy Coleman) and wittily ultra sophisticated lyrics and book (David Zippel, Larry Gelbart) CITY OF ANGELS reveals simultaneously both the possibilities of  a stage musical and  the demanding intellectual feats of ‘straight’drama.

The dialogue is very zingy. Here are two examples:- “Only the floor kept her legs from going on forever,” and “If you’re not celibate we can raise hell a bit”.

Joseph Nalty’s snazzy choreography is tight, precise and full of zing with hints of Fosse at times .

Ashley Darby’s multi level set, ranging from city offices to poolside, with various ‘flats’’ and fly-ins at times was perhaps  a little minimalist at times but extremely effective. The lighting was very atmospheric.

Vocally the cast was terrific and in fine voice and the ensemble work was well handled. The four ‘angels’, akin to  radio back up singers who comment on goings on, were terrific.

Lachlan James O’Brien as Stine the writer was excellent , slogging out ‘, writing ‘the show.

Jacqui Greenfield as Donna/Oolie was tremendous .Dark and petite she was a stylish, slinky presence.

Simon Ward as Buddy the producer was leonine, prowling around dominating the stage .

Strong performances all round in a multi layered , impressive and dynamic performance.