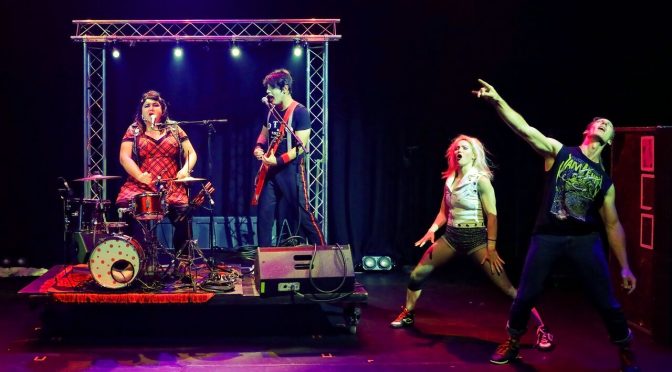 Last night’s audience certainly loved it.  ROCK BANG is sure to be a huge hit during the Sydney Festival.  Circus pings all the pleasure spots and nothing pleases like Circus Oz who have been leaping flying tumbling innovators for over 40 years.  This time though they have enlisted the high energy of Otto & Astrid from Die Roten Punkte and created a boisterous, rockin show which definitely needs categorising under not-as-we-know-it-circus!

Opening with a thumping rock number live and an aerial ring swing over the front rows, the show hits momentum quickly.  The characters of Otto and Astrid are funny and silly and very, very dark as they share their origin story.  German brother and sister to all intents, let’s just gloss over the Flowers in the Attic-ness, they will tell a sad tale of loss (bus or lion) then success as a punk band.  Kick ass drums and squealing guitar!  And stowaways to Australia in a Circus Oz trunk.

Otto calls it a ‘circus rock opera’ and it is.  Music is the framework and it’s loud (not earplug loud but seat shakin’) however you will find as much circus as you need.  Aerial rope and ring, juggling pins and lumpen things, plate spins, fire down the pants and Namaste yoga balances and some terrific tumbling.  And April, a standout performer in a skilled and professional ensemble.

There’s also haemorrhoids and Wim Wenders and a bloke stripped down to a posing pouch.  There’s a heads up on the Sydney Festival website which is best to take note of …“Recommended for ages 13+. This performance contains haze, strobe & nudity.”

There’s also a hot hit of shadow puppetry with some every sophisticated cutouts … delightful to watch.  These appear on a roadcase top which is very effective.  The set works on this utilitarian level with road cases coming in and around to be launching pads and speaker stacks as hideyholes and levels.  I really admire the artistry of this show as I have worked often in that theatre and, not only is there hardly any wing space, but there’s no backstage either.  It’s really impressive how smoothly it all runs. Plus the exceptionally clever rigging on a quad-truss for vertical tether discretely off to the side.

At the end of the show Otto will do his dammedest to get the audience to rock and bang and they were all pretty hyped by then so … no worries for devils horns and thump of fist.  The audience tumbled out with a great rumble of enjoyment with the teenagers in the group cutting a swathe to the merch store to meet the characters.  They obviously loved it and their parents seemed just as bad.  Gotta love a show that amps the crowd the way ROCK BANG does.

ROCK BANG, playing as part of the Sydney Festival continues until January 13.