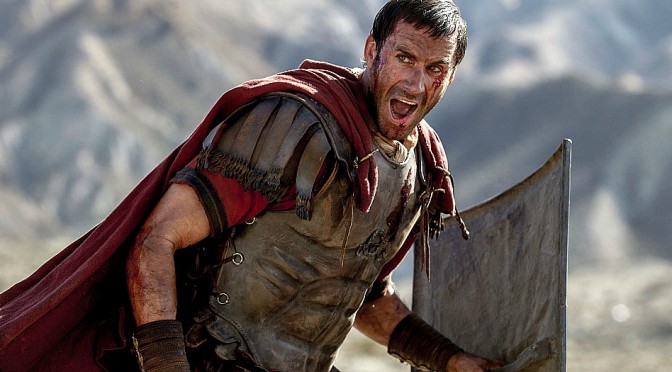 Good gawd almighty! The Messiah is a Maori! Kiwi actor Cliff Curtis is the Christ in Kevin Reynolds RISEN, a Palestinian pulper where DA Pontius Pilate having gotten very cross with a Hebrew hippie finds himself in a pickle when the body goes missing.

Send in Clavius, his top investigator to find out who stole the body and steal it back. Poor Pilate is stuck between the Pharisees and Rome and should there be an insurrection he’ll have a Caesarian section carried out on his scrotum.

Clavius rounds up the usual suspects – a hooker called Magdalene seems a good place to start, slap her around and she’s sure to spill. But she’s haughty with a holier than thou attitude and none of the other associates seem too concerned with being lent on. Before you can say rinse the blood of my toga, the tribune’s tribulations teem with irritating suspects like the balmy Bartholomew, a happy clapper who makes Hillsong look like multiple depressives, Thomas, who is no doubt, a doubtful witness, and Peter, the cock crow denier.

The case was a cock up from the start. Pilate should never have released the Corpus Christi into that Judas, Joseph’s hands, with his fancy private tomb. Why special privilege in death when no quarter was given in life?

Were the fat cat Pharisees in cahoots with these fresh minted Christians? If they’d just shovelled the crucified corpse into the mass graves of all the others executed, there’d be no case.

None of this is properly investigated, making Joseph Fienne’s Clavius a pretty despicable detective. As Good Joe Friday would say, Just the facts, just the facts. But what are facts in the face of blind faith?

As a police procedural, RISEN is a plodding pedestrian piety, a missed opportunity of a cracking conspiracy caper. Mars worshipping Clavius is too quick to convert to the cult of the Nazarine, although one could argue that he is weary of war, and any excuse to switch allegiance from one god to another would be heartily embraced.

No such conversion for corpulent Pontius Pilate, given even world wearier gravitas by Peter Firth, channelling Charles Laughton, who finds his succour in vino and Judean jacuzzi like an unhappy hippo surrounded by hypocritical Hebrews.

Or for Clavius’ dogged deputy, played with due diligence by Tom Felton.

On the plus side is a grand production design by Stefano Maria Ortolani on locations in Malta and Spain and an evocative score by Roque Baños .

Give this movie up for Lent.