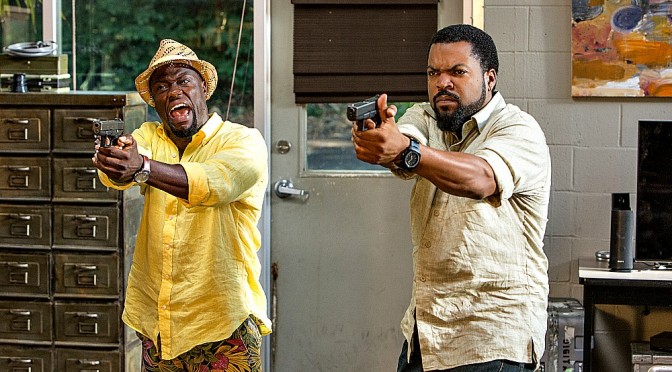 It’s not everyday there are thousands of screaming fans at Melbourne Central Shopping Centre. This took place recently when people crammed in at the balconies on every level, some waiting for many hours, to get a glimpse of stars Ice Cube and Kevin Hart at the Australian premiere of their new film RIDE ALONG 2.

RIDE ALONG 2 is the sequel to the 2014 movie where Kevin Hart plays a high school security guard who must prove to his girlfriend’s brother, James Payton played by Ice Cube, that he is worthy of marrying her.

Ice Cube and Kevin Hart greeted and thanked fans for coming out to support the film at the premiere which was hosted by Tommy Little.

Ice Cube and Kevin Hart made brief appearances at the introduction of the screening to a packed cinema. Not surprisingly, hands with phones shot up in the air capturing the moment.

Already released in the US, it became the first film to overtake Star Wars: The Force Awakens for number one at the weekend box office. So far it has grossed over $100 million.

“It’s always good to be number one,” Ice Cube told Sydney Arts Guide, on the carpet arrivals, “We not bragging Star Wars but we have a long way to go to be anywhere as successful as that.”

When asked by the Guide, if there was going to be a sequel or even a Ride Along franchise coming up, Ice Cube offered these words, “That’s our dream, we talk about it all the time, but we don’t nothing for granted and we don’t count our chickens before they hatch and we going to wait. If this is successful, then we’re blessed to do another one.”

Ride Along 2 picks up after the original. Fast talking Ben Barber (Kevin Hart) is fresh out of the Police Academy and eager to get in on the real action along with his future brother in law James Payton (Ice Cube). To take his mind of the stress of his big upcoming wedding day, Ben and James will team up once again and travel across to Miami to stop a corrupt drug kingpin from expanding his empire.

Along for the ride is professional tech hacker A.J played by Ken Jeong, best known for The Hangover series,l and Olivia Munn as Detective Maya Cruz to help investigate the case.

Like its predecessor, Ride Along 2 has some funny moments though the dialogue ,at times, is very repetitive. While it is not as good as other buddy cop films like 48 Hours, Lethal Weapon, and Rush Hour, the brothers-in-law are still worth coming along to see.

Come along for the ride. RIDE ALONG 2 is now screening in cinemas.