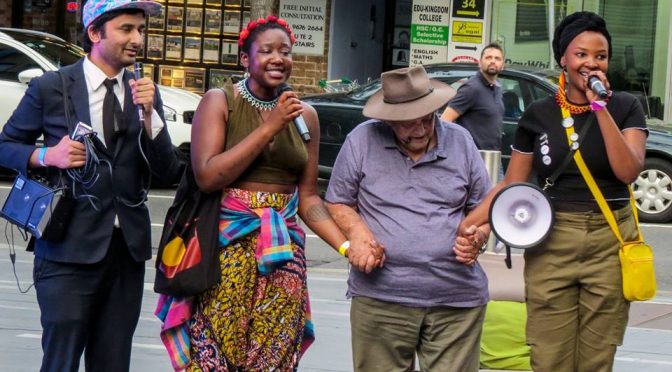 RHRN is produced by Urban Theatre Projects in partnership with Blacktown Arts.   We had the opportunity to speak to Rosie Dennis UTP Artistic Director and RHRN Curator.

SAG:      It’s a pretty exciting project you’ve got there. I loved my time wandering around Blacktown with a bunch of strangers.
ROSIE:   It’s fun isn’t it?

SAG:      Have you had lots of people come through?
ROSIE:   Yeah look we have. I think we are already sold out on our Saturdays which is really great. The responses have been really great too.  That it’s a really unusual experience, that it feels really personal and also just really enjoying the street and having that kind of space between each work. People having a good night out.

SAG:      I think your hosts have a lot to do with it as well.  I had Nancy Denis on my tour and she was just incredibly approachable and excited and warm and obviously loving the environment.  I spoke to some people from the other groups and their hosts were the same.
ROSIE:   Yeah I do think they’re incredibly important. When people come to a UTP show or experience they often say that they feel that we really thought of them in putting the whole experience together.  The hosts’ brief is at the beginning of the night to blow a big bubble and to just put it around the group and hold them in that bubble all night. And you want your group to fall in love with you by the end because you are going to want them to sing.

All the hosts are really different and interestingly the feedback is that everyone feels like they were on the right journey. Because the art works are experienced in different timelines, whatever sequence they have seems to suit the audiences. On Saturday night some said oh it was wonderful finishing off with dinner, or going to dinner after Uncle Wes and others said was really nice to go to ‘Nightline’ and then go to dinner.  So it’s really interesting that all the audiences seem to feel that their show on the night is how it supposed to be.

SAG:      And I gather you been working on this project for over two years. Did it come fully formed or did it develop out of discussions with the artists.  How did it begin?
ROSIE:   It’s building on a body of work. There’s been a couple of things using this model done in the past and it was about how do we do this and bed it down in a place.  And by that I mean – come back and do it again in two years say with new works.

And the other overarching thing that was driving this project was how do we engage with young people?  We wondered what it would be like to matchmake professional artists with teenagers, kind of 15 to 26, I wonder what works will be created? That was a pretty clear provocation with all the creative artists.

SAG:      I can see that you worked directly with schools on the trampoline project didn’t you?
ROSIE:   Very directly, that was an amazing partnership. Our producer Frank got all these empty trampoline frames. And I should say that Meg Wilson had done this work in Adelaide and I saw one trampoline and I thought gee that’s a great thing isn’t it. Wow. A handwoven trampoline mat!

That would work amazingly well in Western Sydney because there’s so many people who do weaving.  And because of the different languages spoken here, doing a task based creative project:  it doesn’t matter how confident you are in English you are connecting over something which is physical but also builds to be something beautiful and visual.

I always do I love doing projects like that because they’re so accessible. So we were taking these trampoline frames into the schools and all the kids were … aaah there’s nothing on it.  And we put them where there was a balcony over the quadrangle and week by week more students would hang around there so they could see the mats been woven.   It was a very positive experience for the whole school, for the students who were in the project weaving and for the artists.

SAG:      That age comparison is actually very interesting because there were young people on my tour and then you’ve got Uncle Wes, an indigenous man who’s 96, sharing his life.
ROSIE:   He’s full of stories isn’t he?  Any opportunity the company has to work with him we jump on it because that’s not going to be around forever. Last night a man came up and gave Uncle Wes a big kiss on the hand.  You just have to sit and listen to stories, he’s been around for nearly 100 years.

SAG:      I was very moved by the short film about the Blacktown Native Institution, I’m a local and I had no idea.
ROSIE:   That warrants a full documentary and I really hope someone gets in and makes it. For me, putting it there, it’s is about right here right now.

SAG:      It’s also a chance to see Blacktown right here right now because the streetscape is changing in a big way soon.  All of those building we were going in and out of will be gone.
ROSIE:   Yes it’s all slated for demolition to make a different public space for people.  We love Blacktown.  It’s a really big community but it’s really positive and a lot of generosity.

SAG:      I can see that real pride of place in the volunteers who are working on the project. There’s a care about the experience, it’s wheelchair accessible, no one gets lost.
ROSIE:   Not all of them are Blacktown locals, but the large majority are Blacktown folks. They just whack on that Tshirt and cruise around and see all this work that’s in their hood and they get that we are wanting to show a different Blacktown.

SAG:      Is your number crunching showing you that people are coming from outside Blacktown to see the show?
ROSIE:   Yes. I’m not going to know fully until the final figures but typically the trend of our data, we’ve been collecting data for many years,  but concrete over the last five years is that 2/3 of the audience visit us in Western Sydney from all over and 1/3 specifically comes from the local area we work in.

We had someone come in from Broken Hill specifically to see this, they came to see Blak Box which we did at Barangaroo earlier this year.  So it’s interesting to know that people are prepared to travel along way to see something that we are putting on.

SAG:      I didn’t have far to come but would have travelled any distance to see the show.  Blak Box is returning for the Sydney Festival and I am really looking forward to that.  Thanks again for speaking with us especially in the middle of such a busy time.

ROSIE:   A pleasure and we look forward to welcoming you at Blak Box.

RIGHT HERE. RIGHT NOW.  from Urban Theatre Projects[Facebook] is produced in partnership with Blacktown Arts[Facebook] and presented in Blacktown’s Main Street.  Thursday, Friday and Saturday across three weeks from 1-17 November 2018