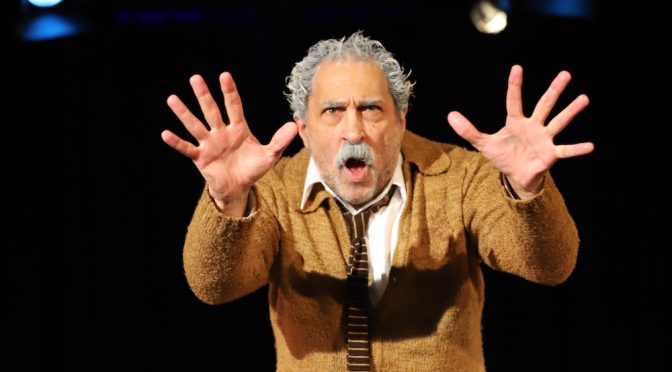 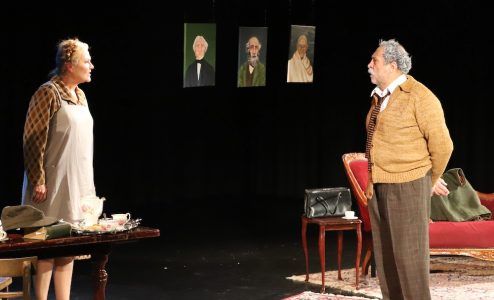 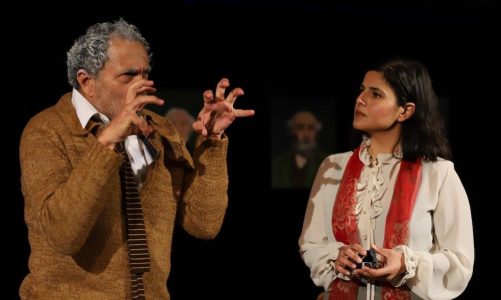 Prolific American playwright Mark St Germain writes fascinating plays. Many of them pivot around  meetings involving famous people. The meetings are a fiction but that’s not the point. The point is that the encounters raise important themes that are great after show talking points.

My favourite play is ‘Freud’s Last Session’ which played back in 2018 at the Seymour Centre. It featured two great minds, Sigmund Freud and C.S. Lewis discussing some of the biggest questions of human existence; what is the nature of love, how do we find meaning in our lives. Their meeting was set against the chilling entry of England into World War 2 as it is being broadcast in the background on the radio. It made for engrossing theatre.

The same can be said of St Germain’s play. RELATIVITY. This time the meeting is between the great American physicist Albert Einstein and his ‘long lost’ daughter. Historical records indicate that Einstein and his wife had a baby girl out of wedlock, which was of-course frowned on at the time, and the baby was very ill. Nothing else is known. This is the work of St Germain’s very active imagination.

Is the price for fame worth it? How important are career achievements? Isn’t looking after relationships more vital than the solitude needed to produce great work. These are some of the themes that the play explores.

Johann Walraven gives the play a strong production. The staging was good with a violin hung up against a wall, Einstein’s desk, a large sofa, portraits of Gandhi and two famous scientists against a wall, and a covered birdcage. A quibble, I am not sure why the bird cage and the references to the bird were necessary. Entrance came from the back of the stage. The set and costumes were good, giving the feel of the period.

Nicholas Papademetriou played Albert Einstein. Interestingly, it was Papademetriou who played Sigmund Freud in ‘Freud’s Last Session’ at the Seymour Centre in 2018. He must enjoy playing great minds and the challenge of playing such iconic figures. His performance is a convincing one, from the very start as we see him wearing an incorrectly buttoned up cardigan. As the play unfolds we see his increasing unease as Margaret reveals the nature of her visit.

Nisrine Amine played Einstein’s ‘long lost’ daughter, Margaret. This was a performance marked by fierceness as she tackled the Professor about his life choices. The constant theme in her confrontation was her belief that it is better to be a good man than a great man, that all the kudos that society gives you for your brilliant achievements isn’t as good as being a decent person who tends his family and his relationships. Einstein counters that he has chosen to follow his gift and resultantly his career, that he didn’t want a life of mediocrity, that he at least he will have left a legacy. He was never very good with people, any way.

Alison Chambers played Einstein’s hausfrau Helen in a good performance. Chambers Helen was matronly and very protective of Einstein. As Einstein becomes more and more distressed with Margaret being around, Helen is trying to push Margaret out the door.

You are in the hands of a fine dramatist if you visit Chippen Street. A Joining The Dots Theatre Company production, RELATIVITY is playing the Chippen Street Theatre, 45 Chippen Street, Chippendale until Saturday July 9, 2022.

The next production by the Joining The Dots Theatre Company will be Babette’s Feast at the Greek Theatre, Marrickville which will play between the 6th and 17th September 2022. Next year Joining The Dots has booked in to put up a stage adaptation by Anthony Palermo of Frank Capra’s wonderful film  ‘It’s A Wonderful Life’ between July 4 and July 16, 2023 again at the Greek Theatre in the Addison Road complex, 142 Addison Road, Marrickville.