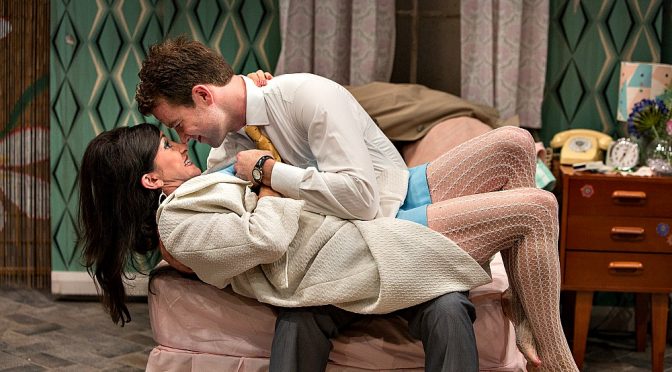 With his plays Alan Ayckbourn, like Noel Coward, has always had the talent to amuse in a major way.

Kirribilli’s Ensemble Theatre Company has been a frequent producer of Ayckbourn works for many years and is currently reviving one of his most popular plays, RELATIVELY SPEAKING.

The comedy in this clever well made play mainly stems from the moves his characters make as they ‘fight’ to get their way and the time that it takes for the others to cotton on to what is happening and work out how they are going to respond.

This is a very funny play and Kilmurry’s team goes to town with it. His creative team – set designer Hugh O’Connor, lighting designer Peter Neufeld and wardrobe coordinator Margaret Gill set the scenes well for the actors to do their shtick.

The cast of four play this piece for the souffle that it is, and give winning performances- David Whitney as the pompous English gent Philip, Tracy Mann as the very demure, correct Sheila, Jonny Hawkins as the naive, Gomer Pyle like Greg, and Emily Palmer as the cherubic Ginny.

My favourite time in the play. It’s the magical switch between Scene 1 and Scene 2 as we move, through the deftness in O’Connor’s design, from being in the living room of Ginny’s apartment to the yard in Philip and  Sheila’s house. After which we are greeted with a typical English setting – a middle aged couple – Philip and Sheila – having a quiet time in the yard – Philip  browsing the paper and Sheila drinking tea.