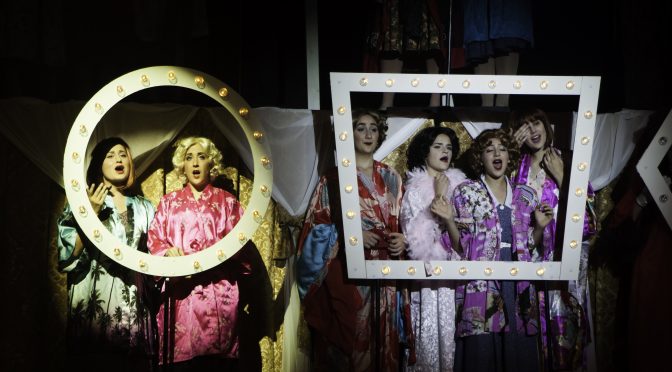 A strong opening to the revival of this quintessential musical comedy directed by Christie Koppe who was drawn to this project due to it’s large-scale, its classic tunes and effervescent storytelling.

It’s the kind of Broadway feel good musical loaded with knockout song and dance numbers (“We’re In the Money’, The Lullaby of Broadway, “Dames”, ‘42nd Street) requiring high energy from the cast and creativity from the production team.

42nd Street comes from a line of musicals that emerged initially as Hollywood films. Based on the 1933 Warner Bros movie, the original stage production had a nine year Broadway run and was a tap-dancing extravaganza. It’s based on a book by Michael Stewart and Mark Bramble, lyrics by Al Dubin, and music by Harry Warren.

It’s a musical within a musical. Famed tyrannical director Julian Marsh played by Peter Sharratt is putting on a huge show, “Pretty Lady”, at the height of the Great Depression. We then witness the trials and tribulations of putting up a hit Broadway production.

There’s romance, intrigue, jealousy, and comedy shenanigans and most of all LOTS of tap dancing. This show follows Peggy Sawyer’s journey as she stumbles at her first step into the chorus line, then sets about tapping to the top as we witness her personal transformation.

In the iconic words by Marsh “you’re going out a youngster but you’ve got to come back a star!”

A terrific performance by Lorna McGee returning to the stage after a 7 year hiatus as the young, naive new chorus girl, Peggy Sawyer, projected to stardom by an accident to leading lady Dorothy Brock. This gal can sing, dance and act up a storm, perfect casting and a wonderful triple threat find by the Director, Koppe. She has a beautiful voice, her sheer energy and exuberance is in perfect sync with her character.

The Diva Dorothy Brock was well played by Rebecca Wallace who revels in that role as the temperamental, ageing, dominant leading lady. Wallace’s voice, acting skills and solid experience earned in Opera circles shone through.

There were wonderful performances from Greg Robinson as Billy Lawlor, the young lead in the musical within a musical, ‘Pretty Lady’. Another great triple threat find, he sang well and a superb tap dancer fitted his role superbly.

Jennifer Barker sang well with heart in the role of the strong but warm co-writer Maggie Jones  and Keely Soulsby dazzled with her tap dancing and singing in the lively role of ‘Anytime Annie’.

42nd street is a demanding tap dancing musical requiring high precision on a large scale. For a vast majority of the show, the many tap dance routines were wonderful to watch and the Ensemble performed well. In a few numbers such as ‘We’re in the money” the tapping and dancing could have been tighter and better in sync. Perhaps the holding of “$” signs created more difficulty for the dancers, though some of the flourishes did little to mar my enjoyment of the show.

Also the 1930s feel of the show was well communicated with the second half of the show containing more glitz and glamour. The lovely costumes were appropriate and the backdrops changed the scenes well. The “Forty Second street’ number led by Peggy Sawyer with Dancing Company along with the Act two finale were the strongest numbers in the show.

I thoroughly enjoyed Regal Musical Society’s production of 42nd street. I left the theatre smiling and humming some of their wonderful tunes.

Come and meet those dancing feet……..

42nd Street runs through to Saturday 20th May with 4 performances left at Rockdale Town Hall.

Put a little zest in your step and get your tickets to 42ND STREET today!