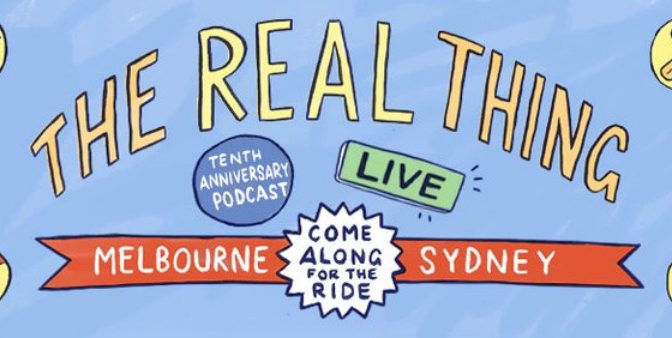 One of my first memories is sitting on my dad’s knee in a tiny booth at 2AY, as it was then , learning  to ‘score’ a record.  Running the groove of the black shellac disc under the needle at exactly the right spot for the content to start immediately. What a joy and delight then to see THE REAL THING recording on all this new fangled equipment.  Cables everywhere , mics, iPads, phones, music FX machine etc.  And 3 wonderful stories, music and some admittedly dodgy Magic.  My idea of a good time.

THE REAL THING is a podcast through Radio National  .  “Each  episode we venture into the corners to discover the characters, scenes and stories that make this country unique.” according to the RN website.  They have joined with Audiocraft which is an initiative to bring together  producers from the public, community, and independent radio and podcast sectors.  They did the show in Melbourne the night before so we were assured that it is officially a national tour.

Opening for them here was Michaela Morgan from ALL THE BEST on FBi , a Sydney Independent Youth  Broadcaster.  In a really well researched, sourced and edited  radio story  the full house audience got to hear about the origins and weirdly Australian  phenomenon of the ‘Nutbush City Limits’ dance.  Jake from Tennessee and Rebecca O’Connor (a Tina Tribute Artist) provided some entertaining insights.  O’Connor, who is Irish , thought her Australian audiences were doing Irish Dancing when she first encountered it. It might be radio but your feet are wanting to move and your imagination definitely engages when we are told that you can ‘nut’ to La Bamba or in double time to Greenday.  Anything in 4/4 will do!  Too much imagination in fact as I had to turn the radio off on the way home.

Mike Williams and Timothy Nicastri are THE REAL THING and they have carefully crafted a highly entertaining live radio show.  It begins with a mystery .  Jimbo drops in on the recorded audio and it sounds like he might be facing the loss of his best mate, Gary.   Williams and Nicastri are engaging presenters and their perfectly cued and neatly scripted live comments are interspersed with recorded interview grabs, s and the sound is taken from social media video clips.

They talk about their 8 previous shows and a further mystery arises about their 9th show.  Since this night is advertised as their 10th anniversary something is obviously missing.  The 8 have included the stories of a Junee  indigenous man, a former Paralympian and  Frank Hunt, the writer of ‘I was only 19’.  The  pair freely admit to borrowing Classic FM’s station wagon way too often but there seems to be a lot of room for epic and uniquely Australian stories in the back seat.

The mystery of Podcast 9 is solved as we hear the honest, raw and revealing story of a woman with a past that illuminates her personal experience of survival. It is slickly produced, edited to flow and includes just the right amount of detail without slowing the narrative.  Gary and Jimbo’s story has been played in parts but their ending is truly surprising and intriguing.  Though it’s been a bit of a long night on those shockingly uncomfortable chairs, admittedly mitigated by the zooper doopers at the box office , the finale of the night is wonderful.  Such a delight .