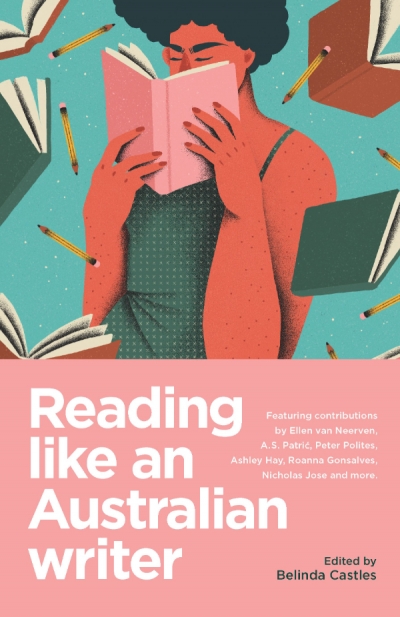 I notice this title is being promoted as a Mother’s Day gift at the Sydney Writers’ Festival.  Beware. This is a serious book written by serious Australian writers, mostly novelists, about how they themselves read books by other Australian novelists. It’s not for the even above-average book club member or fiction lover.  Academic and author Dr Belinda Castles asked 21 women and four men writers to craft essays on what each thought of a particular Australian writer they liked and what their novels meant to them.  The essays are in the various forms of ‘letters to the author’, ‘notes to self’, long analysis of writing technique, re-writes of PhD theses and a few general rambles.

Who is the book written for? Since the editor and 21 of the 25 essays are by women, it might be the book is intended for the  chick-lit market. But it’s not. It’s too academic. I dissuade anyone from buying it for their mother this Sunday. I do encourage serious writers and academics who teach Creative Writing or Australian literature to read this title.

It is a serious and varied reflection on how a particular novel influenced each essayist’s  own writing and career development.  Nigel Featherstone’s ‘Fearless’, on Christos Tsiolkas’s novels, is perhaps the most interesting piece.  There are essays on Australia’s best known writers (Helen Garner, Tim Winton, Peter Carey) and emerging writers. I particularly liked Hoa Pham’s essay on Ci Vu’s novel Anguli Ma, A Gothic Tale. Her reflections on Chi Vu’s reflections on the life of war-torn memories is worth a read.

Who reads novels?  Surveys consistently find that women read far more books than men, especially fiction. Men account for only 20 percent of the fiction market, according to surveys conducted in the U.S., Canada and Britain. Book groups consist almost entirely of women, and the spate of new literary blogs are also populated mainly by women. But don’t get Reading Like and Australian Writer for our mother this Sunday unless she teaches writing or is a deadly serious writer herself.

Publisher : New South Publishing, an imprint of the UNSW Press.