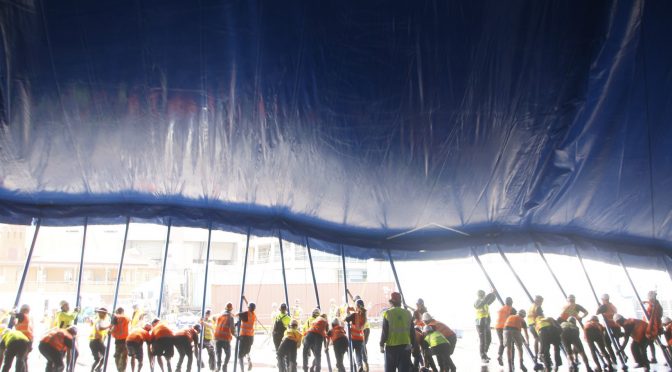 Despite its many appearances in Sydney, on this occasion media was invited to the raising of Cirque du Soleil’s Big Top.

The amazing thing is that despite all the mechanisation and engineering advances, the Big Top had to be raised manually.

Accordingly, 60 technicians raised more than 100 metal poles in stages to complete the final step of building the roof of the grand chapiteau. In addition to the locally sourced labour, more than 30 Cirque Du Soleil specialists from Montreal will arrive to finalise any problems prior to the grand opening night.

Even after the raising of the Big Top there are another eight days of intensive labour before the public can be admitted.

In order to move from city to city the Cirque Du Soleil crew utilises 85 to 90 shipping containers prior to setting up in a new city.

The Big  Top stands about 25 metres (56feet) high and is 51 metres (164 feet) in diameter. It is supported by four steel masts that each stand at 24 metres (79 feet) high . More than 550 pegs are required to anchor the Big Top which can accommodate an audience of more than 2,400 people

In addition to the Big Top there are other tents which involve installation of the entrance, hospitality and rehearsal tents, administrative offices, workshops and kitchen.

iIn my awe at witnessing the raising of the Big Top I almost forgot to mention the show which is playing within it. It is Kurios-Cabinet of Curiosities which plays at the Showring Entertainment Quarter, 122 Lang Road, Moore Park.

The circus premieres on the 2nd October and is playing for an extended period through till the 24th November, 2019. Written and directed by Michel Laprise, Kurios-Cabinet has a cast of 47 artists from 17 countries.

Kurios-Cabinet is a tale in which time stops in the latter half of the 19th century inside a fantasy world where everything is possible. Reality is relative and audience perception  will be transformed.

You can go to  U Tube to watch 13 episodes of Kurios-Cabinet on tour and for more go to Cirque Du Soleil’s U Tube channel or follow it on Facebook.