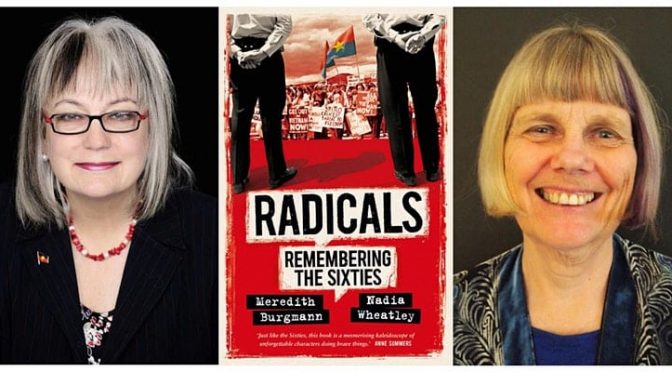 Well known activist and politician Meredith Burgmann and distinguished Australian writer Nadia Wheatley, both spirited radicals themselves, have written a book about themselves and 18 other activists from the 1960s era in Australia. Included are eight women and twelve men. There is an emphasis on the Sydney cohort but also included are rebels from  Melbourne, Adelaide, Canberra, Rockhampton, Townsville, Nambucca Head, Hobart and the Snowy Mountains.

Meredith’s and Nadia’s introduction is wonderfully light hearted and generous. For example, Meredith decries the boredom of growing up in the Sydney suburbs of Cheltenham and Beecroft yet she is understanding of that need for boredom. “To our parents, this social and political stasis seemed wonderfully safe.  They had suffered the double whammy of coming of age through the Great Depression and the Second World War. Unlike their generation, we had shoes on our feet, food on our plates and peace in our time.”

This generous tone carries on throughout the 377 page book. It is a delight to read. It is light-hearted but hard-hitting. It took years to change public opinion and many of those battles are ongoing, such as Aboriginal deaths in custody.

There are 40 black and white photos of the activists being carried off to jail, marching with banners, gathering Freedom Riders and the like. The index is good and useful because there are maybe a hundred other people from the era mentioned in the twenty chapters. It also has good one-page biographies of each of the twenty ‘radicals’ as an appendix. Reading about someone’s activism from  50 to 60 years ago makes you want to know what they’re doing now. Some are taking care of grandchildren. Some, like Geoffrey Robertson, are still in the public eye. These short biographies are as interesting as the 20 page chapters of each one.

I found the many references to the American experience surprising. The book occasionally reads as if the ‘radicals’ were following America and not leading Australia. The frontispiece even quotes from the Washington Monthly. “The Woodstock generation will go to its grave with a sense that it is special.”  In the Robbie Swan chapter,  this is compared to ‘Australia’s Woodstock’, the Canberra Aquarius Arts Festival in 1971.  There are also many references to the American anti-Vietnam War movement, the civil rights campaigns and the free-love movements. The parallels in Australia were the movement against Australia’s participation in the Vietnam War and conscription, Aboriginal rights including voting rights, women’s liberation and gay rights.

How do these ‘radicals’ of yesteryear compare with the school strikers and extinction rebels of today? Very differently. In the 1960’s, the older generation was confronted and it pushed back. But now, 2021, the vast majority of the Australian parents, grandparents and the public support the teenagers marching in the street.