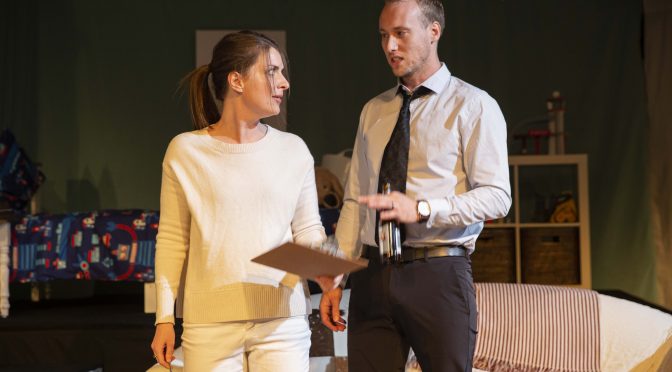 The action takes place in Becca and Howie’s family home. They recently lost their four year old son, Danny, as a result of being hit by a car after he raced onto the street to get his dog, Taz. The couple are trying to cope with their lives after the loss.

The play begins in a relaxed manner with a conversation between Becca and her sister Izzy. We learn that Izzy has become pregnant and pain and grief escalate between family members.

A birthday party for Izzy creates conflict as their mother Nat raises the issue of blame with her anecdotal reference to the tragedies that struck the Kennedys and Aristotle Onassis.  Becca isn’t interested in apportioning blame and is fatalistic.

Becca and Howie look set for a collision course as they have to decide whether to sell the family home which has too many painful memories for them. Howie wants the dog Taz back much to the consternation of Becca who reluctantly agrees.

Jason, the cause of their angst, the teenager whose car hit Danny, enters their lives causing further drama.

From eating creme caramel to chocolate torte, the relationship between food and its comfort benefits is demonstrated throughout the play.

Much of the action takes place in Becca and Howie’s living room and kitchen area with stairs leading up to Danny’s untouched bedroom. The stage was well detailed/adorned with sofa, coffee table, fridge, bench-top, a large pot plant, and Danny’s bedroom featured a bed, an artwork, a stuffed dog, books and toys.

RABBIT HOLE was expertly directed by Christie Koppe who handles the subject of grief well, with her production depicting its many layers. Koppe also incorporated a light touch in the production so that it did not become overly heavy or morbid.

This is a good work for actors to perform, and these actors play their roles faultlessly. The cast had a great rapport on stage. Imogen Morgan’s  portrayal of Becca was moving and heartfelt.

Peter William Jamieson was authentic in his portrayal of Howie who tries to reconnect and get closer to Becca which proves to be a real struggle.

Rachel Giddens as Becca’s loveable sister Izzy demonstrates sensitivity about loss in being aware of Becca’s feelings regarding the upcoming birth of her child.

Alison Chambers who plays the sometimes tackless mother Nat has been witness to even more tragedy in the family with the death of her son Arthur at the age of 30 from suicide.

Sam Wallace gives a convincing performance as the nervous, stressed teenager Jason who wants to be exonerated for the death of Danny. One  of the most moving scenes in the play features him in the scene where Becca is reading a letter he wrote on Danny’s bed with Jason lit on the side of the stage, saying the letter out loud.

Jason discusses with Becca the idea of a parallel universe and Becca agrees not to be sad in it.

RABBIT HOLE  is about a delicate warren of relationships, and is a not to be missed production. An Exit Game production, RABBIT HOLE is playing the Chippen Street Theatre, 45 Chippen Street, Chippendale until the 27th April with performances nightly at 7.30pm.